England are in firm control of the match.

Alastair Cook built on his good start by getting to his highest score in 28 innings, when he crossed 72 against India in the third Test at Southampton. Along with Gary Ballance, Cook over 100 runs to make the put England firmly ahead at Tea on Day One.

Ballance scored a resolute fifty as well to continue an impressive start to his Test career. The left-hander started sedately but grew in confidence and toward the end of the session started scoring freely, finding the fence almost at will.

On a day when Pankaj Singh made his debut and nearly made Cook his maiden wicket, Cook went past milestone after milestone to have his best day on the field in a very long time. Cook went past David Gower to climb up to the third spot in England’s all-time run-scorer after having gone past Kevin Pietersen on the list in the first session. Cook now occupies the third position behind Alec Stewart and Graham Gooch. Cook also scored his 2,000th run as captain during the course of his fifty.

Earlier, England went to lunch at a decent score of 78 for one against India in the third Test at Southampton. For the first time in the series, the English batting looked solid in the face of some probing Indian pace bowling, despite losing a wicket before lunch. Alastair Cook looked very secure for his unbeaten 48 runs, and seemed on the way to finding his lost form.

India’s opening bowlers Bhuvneshwar Kumar and Mohammed Shami got some good movement off the pitch, but a complete lack of pace in the surface meant that neither bowler was able to trouble the batsmen too much. The introduction of Pankaj, making his way for an injured Ishant Sharma, brought about an edge from Cook, but it was put down by Ravindra Jadeja at third slip.

England won the toss and chose to bat. India’s star of the second Test, Ishant Sharma, missed out due to injury. Rajasthan pacer Pankaj Singh made his Test debut for India four years after appearing in a One-Day International (ODI). 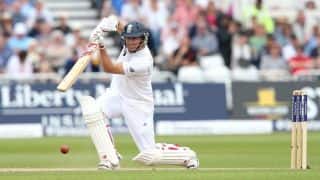 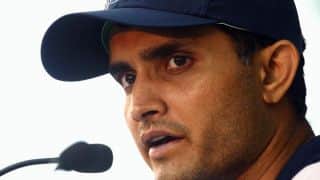