Alastair Cook bounced back by scoring 95 on Day one at Southampton.

Hussain was quoted by Sky Cricket, “It shows great mental strength. The pressure he has been under for quite a long time, both with his own game and with England losing, is absolutely immense, so it was great mental strength to produce that innings. It helped him today that he didn’t have any of the burdens of captaincy — field settings, last-wicket partnerships — all he had to do today was toss the coin, say we’ll bat and go out there.”

Hussain does feel that Cook has some way to go before getting back into full flow. He said, “He’s still a work in progress and it’s whether he can carry this on but England and England fans want him to go back to being the run machine that he once was – and he was nearly there today (Sunday). He will be England’s leading run getter. He was always going to get runs. But can he go back to being the player he was, with captaincy weighing heavily on his shoulders?”

Cook’s innings of 95 and Gary Ballance’s unbeaten ton helped England finish Day One at a good position of 247 for two. Though the rate of run-scoring was slow, they are certainly in a good position and would want to put pressure on India on Day Two. 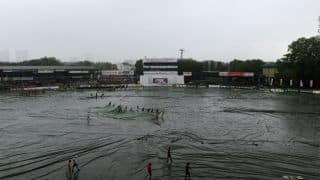