Ballance and Cook added 70 runs by the drinks break of the second session.

England resumed after lunch against India in the third Test at Southampton in good fashion. Alastair Cook, who was unbeaten on 48 at lunch, completed his fifty soon after resumption.

Gary Ballance and Cook went about their business in good fashion, bringing up their 50-run alliance in decent time. The pair had added 70 runs by the drinks break of the second session. None of the Indian bowlers looked like snaring wickets, but given England’s recent batting form, they would not be feeling too secure till they score a few more runs.

Earlier, England went to lunch at a decent score of 78 for one against India in the third Test at Southampton. For the first time in the series, the English batting looked solid in the face of some probing Indian pace bowling, despite losing a wicket before lunch. 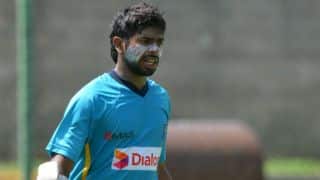