Gary Ballance was dismissed at the stroke of lunch.

The third Test between India and England at Southampton is firmly in the hosts’ control after an impressive batting display in the first session on Day Two. The part-time off-spin of Rohit Sharma produced the key wicket of Gary Ballance at the stroke of lunch to provide some respite for India after they were sent on a leather hunt for the better part of a session.

Bell scored his 42nd Test fifty for England when he got to the landmark against India in the third Test at Southampton. He got to the landmark off 99 deliveries. Ballance got to his highest Test score as well, when he went past 110 — which he scored against India at Lord’s in the second Test of the ongoing series. He got to his maiden Test 150 in the process as well — the first time anyone had reached the landmark at the Aegas Bowl. Ballance was unlucky to be dismissed — for 156 — as the ball struck the pad rather than the bat as he was given out caught behind by MS Dhoni.

Earlier, England finished in a commanding position on Day One thanks to a huge partnership between skipper Alastair Cook and No 3 batsman Ballance. The Indian bowlers toiled endlessly, but were unable to make consistent breakthroughs as a mixture of dropped catches, close decisions and missed run-out chances meant that England lost just two wickets when they could have lost far more. 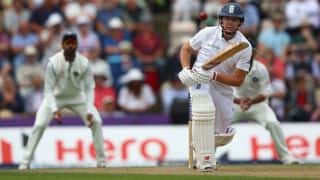 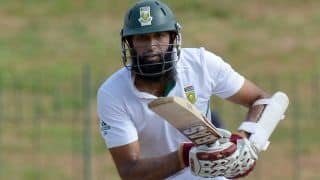