Indian batsman need to make the most of a pitch that appears to be a run-reservoir today.

The day that has dawned seems to have been crafted with care, with cricket being the sole purpose and goal. As the shuttle bus started out from Southampton Parkway on its way to the Ageas Bowl, a couple of middle aged men sat in their formal attire, their respective coats draped neatly on their arms — due perhaps in  equal proportions to the shooting mercury levels or to embarrassed deference to their neglected profession. “It’s too good a day to sit in office,” one of them confided sheepishly.

It may be due to the perfect conditions, but the discussion around the early birds in the pressbox was less about the prospects of the England seamers and more about Moeen Ali’s pro-Gaza wristbands.

The pitch still looks a beautiful strip for batting, with plenty of reservoirs of runs waiting to be dug into. In spite of the tinge of green, the pace has been rather commonplace. And in spite of ominous predictions, it has not yet turned faster as the match has progressed. Apart from James Anderson, who played more on the minds of the batsmen in the fidgety final hour than on the vagaries of the wicket, no England bowler has looked likely to take any wicket.

Already there are words among the England spectators that Murali Vijay and Ajinkya Rahane will be well-nigh impossible to get out in these conditions. Rohit Sharma will be keen to prove himself. And of course, Cheteshwar Pujara is due a big one and Virat Kohli is too good a batsman to remain without a good score for long.

However, a couple of early wickets can still put the Indians under enormous pressure under a 569-run England total and against a rejuvenated side. There is hardly any doubt that the hosts will go all out in the first couple of hours to try and seize the initiative.

The way the day progresses will perhaps hold the key to the rest of the match, whether it will start edging towards a premature death or will turn into a battle for survival for the Indian side. Unfortunately, the first two days have ensured that these are the only options realistically left in the game. 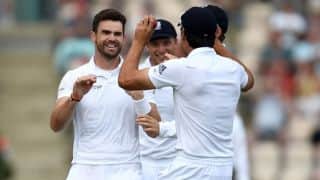 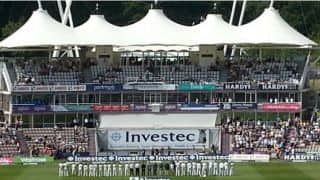 England vs India 2014, 3rd Test at Southampton: Teams pay tribute to cricketers who lost their lives in World War I