Gavaskar asked why Kohli and Vijay were not standing in the slips.

Sunil Gavaskar, the former India captain, expressed his disappointment at Mahendra Singh Dhoni’s choice of slip fielders in the ongoing Test series against England. There have been a few misses from India in the series, the most notable being one of Gary Ballance at Lord’s in the second Test and then Ravindra Jadeja dropped one at third-slip off Alastair Cook at Southapton. While Ballance went on to score a ton, Cook made 95.

Speaking to NDTV, Gavaskar said, “Unless we know why Murali Vijay and Virat Kohli are not standing in the slips, we will keep making these mistakes. They are our best catchers and they are not in the slip cordon. I don’t know the reasons they were not there but it is not helping the team.”

At Lord’s, Dhoni and the first-slip Shikhar Dhawan let go of an opportunity in between them. Gavaskar believes the fielders haven’t been positioned properly. “I feel the positioning of the men behind the wicket was also not quite right. I saw from the commentary box today that the slip fielders were encroaching upon each other’s territory. They are so close to each other that one feels the other is going to go for the catch. I think they need to look into it,” said Gavaskar.

Gavaskar also said that Jadeja is a brilliant fielder, but India would be better off using him in the outfield rather than the slips. 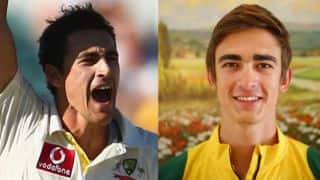