India are the more settled side and would be confident of sealing the series in this game.

The last time England and India faced off in a One-Day International (ODI) at Edgbaston, Birmingham, MS Dhoni’s men snatched victory from the jaws of defeat to clinch the ICC Champions Trophy 2013. A year down the line, India have continued that winning streak from that campaign extending it to seven games as they head into the fourth ODI. Having won the second and the third ODI quite comprehensively to take a 2-0 lead, India are the favourites to win this contest at Edgbaston and take the series. Alastair Cook’s men are under pressure to get back in this rubber.

The forecast for Tuesday’s game is pretty good and there are less chances of rain. Both sides would hope they have a full contest. Last year’s Champions Trophy final was a 20-over affair after rains lashed Edgbaston and forced the reduction in overs.

India would back their winning combination and wouldn’t want to make changes. Rohit Sharma’s injury paved the way for Ambati Rayudu to get back into the side. He made that count with a good innings in the third ODI and will hold on to his spot in the middle. Suresh Raina will be India’s in-form batsman in the middle-order with two good scores behind him. MS Dhoni and Ravindra Jadeja would complete the batting order.

Dhoni may be a bit worried about Shikhar Dhawan’s form at the top, but should persist with him as the opener. Ajinkya Rahane started off very well and will continue to open the batting with Dhawan. Virat Kohli was getting back into form before a moment of indiscretion got the better of him. The batting does look in much better shape after two good performances. The bowling attack should remain the same. Mohit Sharma was seen hobbling off the field during the last game and in case he isn’t available, India could pick Umesh Yadav.

Cook will continue amidst calls to sack him from the ODI side. He isn’t very attacking but adds solidity to the top. However, he would further his case by forcing the issue a lot earlier. Alex Hales has looked in his elements and would want to build on the encouraging start to his ODI career. England would face the spin challenge again with Ravichandran Ashwin and Jadeja casting their spell. Ian Bell, Eoin Morgan and Joe Root would have to play bigger roles to overcome them in the middle. Jos Buttler too has a huge role to play in enforcing the issue and giving the impetus at the end.

England also have to decide on a few spots in their side. Instead of  Ben Stokes, they could perhaps bring Moeen Ali, who  can bowl few useful overs of spin. With Chris Woakes, James Anderson and Steven Finn forming the pace attack, bringing Moeen in would take some pressure off James Tredwell. They brought in Finn for Chris Jordan for the last game and he showed good rhythm.

India are the more settled side and would be confident of sealing the series in this game. England may want to get a few spots right as they would want to show their critics that they can indeed play this format. 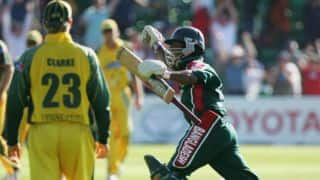