The umpires will carry out an inspection at 10:45 local time and then decide.

The fourth Test between India and England may be delayed due to some light rain at Manchester.There is supposed to be an inspection and then the umpires would decide on whether the game has to start soon. The inspection is said to be conducted around 10:45 and then there would be a call on the start of play.

The England and Wales Cricket Board (ECB) and the BBC tweeted that the covers were on at Old Trafford and there could be a chance of a delay in play. The series is tied 1-1 with two Tests to go and both the teams are waiting to get onto the field and resume the battle.

Still very light drizzle @EmiratesOT with covers on. But we are still hopeful of 11am start. On air 1025 #EngvInd pic.twitter.com/bEYrFlC19p

India had won the second Test at Lord’s by 95 runs before England bounced back at Southampton. It was a victory where all their senior players came to the fore and rose to the occasion to make themselves count. Given the fact that the home side bounced back, one can say that the team would now feel more confident and they may have the slight advantage. 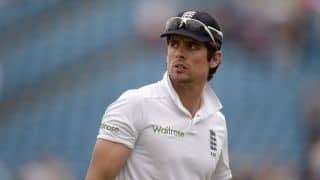