Ian Bell remained unbeaten on 58 at stumps on Day 2 to help England gain an 85-run lead.

England have extended their lead to 85 runs against India, but Ian Bell says the fourth Test match was still hanging in balance.

Bell scored 58 runs in England’s unfinished first innings as the hosts reached 237 for six at the end of day two at Old Trafford.

“It certainly is poised very nicely. Hopefully tomorrow we can get past the 100-run lead maybe get 150 runs ahead if we can. That will put us in a nice position. So far this has been a nice Test match, probably the best cricket wicket we have had all season. It has good pace, good for batsmen and bowlers alike,” said Bell.

The batsman was full of praise for Indian pace man Varun Aaron who has been an addition to the Indian eleven playing his first Test in the series so far.

“He bowled well obviously to pick those wickets. He has a bit of pace and he has used it on this pitch. He is really complimenting Bhuvneshwar Kumar at the moment and the Indian attack looks well balanced in this match with the two spinners in there as well,” he said.

“We have two good batsmen at the crease. But it is going to depend a lot on the conditions tomorrow. They have made a big difference in the game so far as we have seen. Someone like [Jos] Buttler, if he bats for long, he can bat at some rate so hopefully the sun will be shining tomorrow,” he added.

The rain that came nine overs after lunch didn’t stop until the scheduled tea-time and as such there were too many wet patches to dry off. The boundary areas were especially soggy and that made the task tougher and thus play couldn’t get started again.

Bell said waiting for conditions to get better was not that he and his teammates enjoyed.

“Yes it was a little frustrating for everyone. We would rather be out there than just inside. But the grounds men worked really hard but they gave everything and unfortunately we couldn’t get on the ground again. It is a shame really, for everyone, the players and the fans,” Bell signed off. 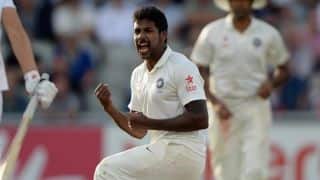