India vs England 2014, 5th Test at The Oval: Play delayed after lunch

India vs England 2014, 5th Test at The Oval: Play delayed after lunch

Covers are coming off though.

Play has been delayed after lunch on Day Three of the fifth Test between India and England at The Oval. Rain had lashed The Oval just before lunch as India were in huge trouble at nine for two in the second innings with both the openers in the hut. England had taken a lead of 338 after the first innings and have put India on the backfoot.

Just before play halted, India lost both their openers. James Anderson trapped Murali Vijay leg-before and then Gautam Gambhir was run-out for three. That was the last ball before the rain came down. India face a huge task ahead of them in this Test match and if they are to save it, they would require a monumental effort.

However, the latest news we are getting is that the covers are coming off and the rain has gone away. 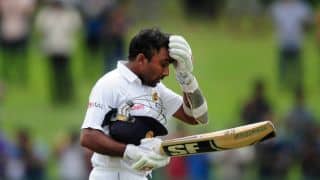 India vs England 2014, 5th Test at The Oval: Play to start after rain delay