India vs England 2014, 5th Test at The Oval: Varun Aaron run out as England set for win

India vs England 2014, 5th Test at The Oval: Varun Aaron run out as England set for win
By Devarchit Varma

England were set for a big win as Varun Aaron was run out for one, as India lost their ninth wicket in the second innings. England need only one more wicket to seal a series win by 3-1.

India are now facing a 3-1 defeat in the series and they have been troubled through the last three Tests. England set the lead today and India have collapsed like a pack of cards on the day. This is one tour they would like to forget. Bhuvneshwar Kumar has been dismissed as he was caught at first slip. 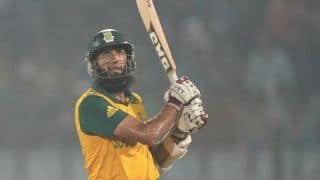