India vs England 2014, Day 4 of 3rd Test at Southampton: Defeat stares as Indians continue to find ways of getting out

India vs England 2014, Day 4 of 3rd Test at Southampton: Defeat stares as Indians continue to find ways of

India end Day Four at 112 for the loss of four wickets against England.

James Anderson and Stuart Broad were expected to be the danger men as India batted a second time. The two Indian opening batsmen did a commendable job seeing them off. But having taken every precaution against the two major threats, the visitors seemed clueless about the other dangers that could lurk in the relatively innocuous nooks and corners. After a decent enough start in the face of menace they stumbled into pitfalls and booby-traps in the most harmless of quarters.

There was a scare in the very first over after tea. Murali Vijay played straight and down the ground, but in the air. Anderson’s hand reached out as swivelled around in his follow-through, but could only get the fingertips to it. Shikhar Dhawan nonchalantly drove the first ball from Broad through the covers for four. The ball moved around, sometimes appreciably when Anderson bowled, but the Indian batsmen remained comfortable, untroubled. Both the batsmen were content to leave the balls outside the off-stump. With Dhawan on strike, Anderson predictably switched round the wicket. The line was probing, the ball close to the body, darting slightly away. The southpaw showed considerable restraint in leaving them alone.

The openers had just seen off Broad, Chris Woakes had been put on, the number of close in fielders had been reduced. And then the curious Indian trend of gifting wickets continued into the second innings. With the score on 26, Dhawan dabbed Woakes to the leg side and set off for a quick, largely avoidable, single. Vijay was slow off the blocks, tardy down the pitch and did not slide the bat in. Broad, rushing in from square leg, hit the stumps with his underarm return. The television umpire watched closely, found the bail dislodged with the bat on the line, and the man who could be counted upon to last hours, trudged back ever so slowly to the pavilion, a living picture of disappointment.

Further jolts were to follow. Moeen Ali, introduced in the very next over, pitched outside the off-stump and did not turn. Cheteshwar Pujara played inside the line, the ball took the outside edge, and Chris Jordan at slip picked up a stunner of an one handed catch low down to his right. The innings tottered at 29 for two. The second Indian batsman with the ability to bat for long, long time left after playing just six balls.

The two big and persistently misfiring guns of the Indian line-up were now together as Virat Kohli joined Dhawan in the middle. The left-handed opener drove and pulled Moeen through midwicket for a couple of boundaries and then survived a rather close shout for leg-before when he tucked his bat behind his pad to the spinner. Not given, he punched Woakes through the covers for a handsome boundary and followed it up with a cut off Moeen to the cover fence.

Jordan’s introduction into the attack got Kohli going. After 29 balls of exemplary patience, Kohli drove the bowler from Barbados straight and through the covers for two glorious boundaries. The ball swung through the session, Dhawan’s edge off Jordan going streakily through the slips for four. There were some tense moments created by Moeen as well, the occasional ball turning and beating the bat. With Dhawan having some anxious moments against Moeen, Kohli manoeuvred the strike to play most of the off-spinner.

The drinks were taken at 78 for two, the strained Indian nerves slightly soothed with this steady association. And just after the interval, the Indians found another curious way of gifting a packet of wickets. Joe Root’s very occasional off-breaks were introduced from the Northern End, as a breather to Meeen Ali, and Dhawan perished to this most insipid of arrows in Cook’s arsenal. The ball gripped, turned, took the edge of the left-hander’s bat and went to slip where Jordan held another.

Moeen was brought back immediately after the wicket. And two overs later, he sent down a straight one. Kohli played for the turn and the faint outside edge was pouched by Jos Buttler. Another promising innings by the Indian No 4 had flattered to deceive. India tottered at 89 for four, three wickets to spinners and one to run out. The challenge was almost over before Broad and Anderson had tasted blood. The turn obtained by some of the deliveries from Root and Moeen were asking uncomfortably loud questions about the policy of not playing Ravichandran Ashwin.

Ajinkya Rahane and Rohit Sharma, two men who had got out to atrocious strokes in the first innings, came together and batted out the remaining overs. Rahane pulled Moeen again, this time all along the ground for four. Stuttering and stumbling the innings trudged past hundred. As shadows lengthened, Anderson came back and Rohit drove him back down the track. It reached the bowler low and full, and the one handed grasp did not quite manage to hold on. The scare towards the end of the day made the session almost symmetric.

Gary Ballance was tried in the penultimate over and Rahane drove him through the covers for four. Rohit refused to attack even loopy tossed up deliveries. India ended the day on 112 for four, Rahane on 18, Rohit on six. The task stretches ahead, 90 overs to survive with only a small portion of the cream of batting left to feed off. The twin threat of Anderson and Broad, the occasional hazards offered by the pitch, the turn and the lack of it on a fifth day wicket, the brain freezes and this compulsive urge to gift away wickets – all need to be negotiated. If a modern day miracle does not take place the road to Old Trafford seems to be securely paved with a 1-1 scoreline. 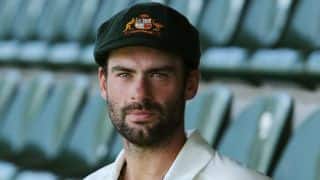 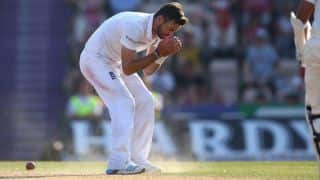