India vs England 2014, Day 5 of 3rd Test at Southampton: Moeen Ali unlikely star as hosts wrap it up in style

India vs England 2014, Day 5 of 3rd Test at Southampton: Moeen Ali unlikely star as hosts wrap it up in st

Moeen Ali took six wickets for England against India in the second innings.

England took just an hour and 48 minutes on the final morning to complete their first Test victory since Durham in August 2013.

“The return bus service will start depending on the match situation,” announced the attendant at the Southampton Parkway, from where shuttles took spectators to the Ageas Bowl in the middle of nowhere.

“Half eleven?” floated a voice from the rear, leading to a literal busload of guffaws.

Yet, the start of the day made one wonder if the query was in jest or earnest. And in the end he proved to be off by just about an hour.

After a maiden by Stuart Broad, James Anderson’s first two balls rose from the back of a length and the third delivery was full. Rohit Sharma prodded uncertainly and feathered an edge to the keeper. The batsman did not want to leave, but most others wanted him to — including the umpire, which is always fatal on such occasions. The snicko said there was an edge, the hotspot showed nothing.

The first runs of the day came as late as the fourth over, MS Dhoni pushing Anderson and scampering across for a single and then scrambling back for the second as the throw from cover went awry. The next Anderson over saw Dhoni steer through the slips and gully for four. And then he followed the next ball as if drawn by a magnet and Jos Buttler dived to his right to pouch it. Anderson’s future in the series hung in balance based on the ominous hearing, but he was doing all he could for England before that.

At 120 for six, the figure of Ravindra Jadeja was hardly reassuring as it emerged with slightly less spring in his step than usual.

Moeen Ali was introduced as early as the ninth over of the day and pitched on the rough outside Jadeja’s off-stump. The innings was in a precarious enough condition for the southpaw to play out a maiden before cutting him for four twice in the next couple of overs.

The fare for the day promised to be brief, but the low price of the final day tickets ensured a healthy crowd flocking in. Anderson continued to run in from the Pavilion end and even the rock solid Ajinkya Rahane had some uncertain moments. At the stroke of the first hour, Rahane leaned forward and drove Moeen through the offside for four. After the drinks break, Rahane turned Moeen to fine leg for three to bring up the 150. This one Indian batsman looked like he could bat forever.

And just as the partnership looked like stabilising, the Indian generosity in the match continued unabated. Jadeja drove hard, missed a straight one from Moeen and his woodwork was bent askew.

Bhuvneshwar Kumar, one of the most successful of Indian batters on the tour, could not quite repeat his gallant feats this time. Alastair Cook, after all the scathing criticism of his batting and captaincy, continued to have a spectacular match.Having scored 95 and 70 not out, effected inspired and rewarding bowling changes, he now moved James Anderson to the short gully. Moeen pitched it up beautifully, the ball took the inside edge of Kumar’s bat, went on to his pad and ended up in the hands of the just positioned fieldsman.

Mohammed Shami swung twice, either missing or skying it to no man’s land. Rahane had a word with him and he attempted a straight batted defensive prod. Moeen’s straight ball snuck past and struck off and middle. Moeen had taken three for one in 12 balls and had become the first England spinner to capture a five for since Graeme Swann at Manchester in 2013. One had to admit that within the constraints of his limited ability, he had bowled beautifully.

The return shuttle had actually started to Southampton Parkway and the time was 12:40.

Rahane struck two boundaries off Moeen, tried his hand at farming the strike and struck Woakes past cover to bring up another fantastic fifty, but the bulk of the applause was reserved for Pankaj Singh’s first single in Test cricket.

Pankaj Singh swung twice, the strokes huge and delightful slogs, and the balls thudded into the boards at the cow corner. And then Moeen cleaned him up to pick his sixth wicket. The bearded spinner’s figures read an incredible 20.4-4-67-6. The margin of victory was a massive 266.

A week, as many experts have already repeated, is a long, long while in cricket. England had been down and out at Lord’s, Cook on the brink of despair. He is back now, as a batsman and leader, and the smile on his face says it all. The team is visibly upbeat, although there remains the niggling doubt over the verdict on Anderson.

For India, there are lots and lots of points to ponder. The team selection policy of leaving Ravichandran Ashwin out is bound to come back and bite into their peace of mind, especially with Moeen and Joe Root accounting for seven second innings wickets. Virat Kohli’s off-stump woes continue to torment them. Except for Rahane and Murali Vijay no one has looked likely to bat for long periods. And Shikhar Dhawan’s continuous failures at the top of the order will result in several sleepless nights for the management. The four bowler or five bowler conundrum will also have to be addressed with some certainty before the next Test kicks off at Old Trafford. 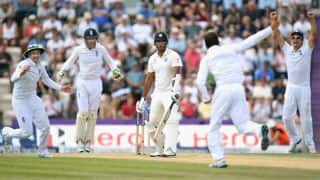 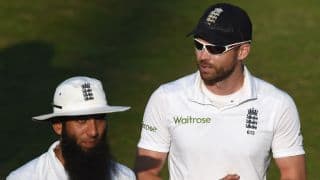