India had lost Ajinkya Rahane early in run-chase of 181.

Shikhar Dhawan and Virat Kohli are trying to help India get off to a good start after they lost an early wicket in the lone T20 International against England at Edgbaston. India are chasing 181 to win and it is not going to be easy. It is important for these batsmen to now help India recover. India are 18 for one in three overs.

Ajinkya Rahane was dismissed early. He had hit Moeen Ali for a six by hitting him for a six over square-leg. And then, he tried another six and was bowled around the legs. Virat Kohli then walked out to bat and is currently trying to get India to a decent start. In the third over, he flicked Harry Gurney over mid-wicket for a four. It was picked quite beautifully with his wrists and smacked for a four. 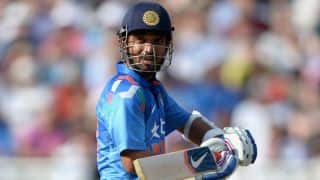 India vs England 2014, Only T20I at Edgbaston: Ajinkya Rahane dismissed by Moeen Ali