Alastair Cook received a guard of honour from the Indian cricket team as he walked out to bat in his final Test on Friday.

England opener Alastair Cook received a guard of honour from the Indian cricket team as he walked out to bat in his final Test on Friday.

England captain Joe Root won the coin toss for the fifth time in the series and opted to bat at the Kennington Oval. As opener Cook walked out with his partner Keaton Jennings, he was greeted by a row of Indian cricketers flanking him from either side near the boundary.

Cook, 33, announced retirement from international cricket on Monday [September 3] saying he had “nothing left in the tank.”

“Although it is a sad day, I can do so with a big smile on my face knowing I have given everything and there is nothing left in the tank. I have achieved more than I could have ever imagined and feel very privileged to have played for such a long time alongside some of the greats of the English game. The thought of not sharing the dressing room, again, with some of my teammates was the hardest part of my decision, but I know the timing is right,” Cook said in a statement released on his behalf by the England and Wales Cricket Board [ECB].

Cook made his Test debut against India in 2006, hitting a century in the second innings in Nagpur. Since then, he has gone on to become the highest run-getter for England in the format. 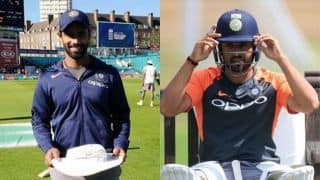