England allrounder Moeen Ali is full of praise for the Indian bowlers, calling it 'one of the best attacks' he has faced.

Moeen Ali has been shunted up and down the order throughout his Test career. He has opened for England and also batted at No.9. Now, he’s batting at No. 3 one of the most important batting positions in the format. This has been done to allow captain Joe Root to bat at his favoured spot of No. 4. Ali has never shied away from accepting a challenge and on Friday, under persistent pressure from the Indian bowling attack, he showed immense patience and perseverance.

So much impressed were his England teammates that they, in his own words, were calling him Geoffrey Boycott.

He played and missed on several occasions, was dropped when batting on two and endured few close calls. But he grafted his way to 170-ball 150. And his stand with Alastair Cook [71] was the reason why India went wicketless in the second session of the fifth and final Test at the Kennington Oval on the opening day.

While, his latest performance might have given faith to the England team management of his capability to bat at the top, Moeen is confident he can make the spot his own. In fact, adaptability is his keyword.

“I don’t see why I can’t bat there or I can’t do the job,” Moeen said after the day’s play. “No matter where I bat I try to adapt to the situation. I prepared differently this week than before, against a newer ball. I just tried to played the line, I felt the ball was doing too much. Maybe I’m not good enough to nick them. At tea the guys were calling me Geoffrey Boycott.”

Indian pacers were a constant threat throughout the day. Cook’s two partnerships at the top first with Keaton Jennings for 60 runs and then with Moeen for 73 runs were the main reasons Indian bowlers had to wait late in the day to stamp their authority.

Moeen was full of praise for the Indian bowlers, calling it ‘one of the best attacks’ he has faced. “I just tried to take it a ball at a time. I thought they bowled really well. The wicket was quite slow, but the ball was always doing something, so I just tried to stay as patient as I could. The Indian bowlers didn’t give me a lot to hit. So I just tried to bat. I don’t always play like that, but we were in a decent position.

“You’re always hoping to let them bowl and bowl. But they just kept coming, bowling same pace, same areas. It was one of the best bowling attacks I’ve faced. They were just always, consistently there,” he said.

Cook was out after the tea session. And England were back into a familiar territory of batting collapses. Moeen acknowledged the frequency of England handing back position of advantage but said it wasn’t something exclusive to his team.

“We do have these collapses but everyone that gets out is a fantastic player and we all know that they all justify being in the side. It is difficult. These things happen. It’s not just us guys, it happens around the world,” he said. “I think there’s some very good players in county cricket who have got the ability to play but obviously we don’t want these collapses all the time and I know they’re happening but hopefully we just need to change our mentality a little bit I think.” 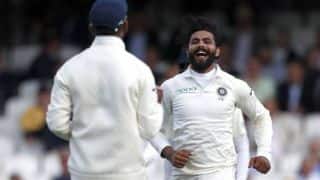 As a bowling unit we did our job: Ravindra Jadeja Alastair Cook 'determined' to contribute in his farewell Test