Jasprit Bumrah, the India pacer, laid the blame on the team not being able to execute their plans combined with some gritty batting from Jos Buttler.

With India reducing England to 198/7 on the opening day, they looked in control. Come day 2, the advantage shifted. Jos Buttler was at the forefront of that change, leading, yet again in the series, England’s resurgence while smartly shepherding the tail. England managed a grand total of 198 during Day 1 but on the second morning, in the first session alone, they clattered 105 runs.

Their last three wickets added 151 as their final total zoomed to 332. And by the time the day came to an end, India were reeling with 174/6 on board, trailing England by 158 runs. England had thoroughly negated India’s Day 1 advantage and are now in sights of a big first-innings lead.

Jasprit Bumrah, the India pacer, laid the blame on the team not being able to execute their plans combined with some gritty batting from birthday boy Buttler.

“We were in a strong position. They batted well and we failed to capitalise [on the advantage]. We tried to bowl in good areas but they applied themselves well. It’s not that we played well and they were better. It’s a mixture of two. We didn’t bowl that well. So, it’s a combination of both,” Bumrah said during a press briefing after the end of second day’s play on Saturday.

It wasn’t the first time that the lower order has frustrated India and snatched the momentum from the visitors. At Edgbaston, England beat India after being 87/7 in their second innings thanks to a counterattack from Sam Curran. At the Ageas Bowl, Curran again knocked down Indian hopes hitting 76 in the first innings to lead England’s recovery from 86/6 to 241 all-out. A familiar tale unfolded in England’s second dig as well.

When asked were there no plans in place to deal with the tail-enders, Bumrah replied, “There’s been no specific planning for the lower order. We plan for each and every batsman. Even if it’s the lower order, we give equal respect. We tried to execute [our plans] today but that didn’t work.”

India are playing with four specialist bowlers in their final Test of the England tour. They currently trail the series 1-3 and England look in prime position to make it 1-4.

Buttler has been the biggest reason behind India staring at yet another defeat. With 349 runs in eight innings, he’s England’s leading run-getter of the series.

Has India found it hard to deal with his threat? “Not very difficult,” said Bumrah. “Just because he’s scored runs doesn’t mean we found him difficult. As a bowling unit, we won’t say that if we get him early so it’s easy. He played well today. he was taking his chances.”

“When you are playing with the tail, you don’t have a lot to lose, you can play with a lot of freedom. Our batsmen have done that before. Virat did that in the first Test [Edgbaston]. With tail, you can express yourself. If you get out, nobody will say anything. It’s a win-win position for a batsman. If it doesn’t payoff, OK but if it does, it’s a bonus for the team.” 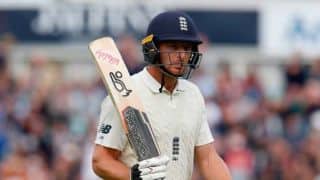