An emotion called MS Dhoni walks amidst a packed Pune Stadium. He is not one to call the shots, for Virat Kohli is now the full-time captain across formats. Dhoni takes the bails off in flash to halt Jason Roy s rampage at 73. He then overturns umpire s decision and signals for DRS right away, forgetting it is Kohli who takes the call. England post 350 for 7, their highest against India. India s top order stutters. Dhoni joins Kohli. India are 56 for 3, needing 295 off 238. Dhoni takes only two deliveries to register his first boundary. The crowd heaves a sigh, for Dhoni and Kohli are in the middle.

Meanwhile, Kedar Jadhav s parents, wife and daughter are in the crowd watching India s best finishers in action. None of the cameramen has focussed on them until now, for none of the family members are Sakshi Dhoni or Anushka Sharma. None of the commentators has mentioned that it is Jadhav s home ground, for he is just another batsman supposedly coined as India s next finisher but only after Dhoni and Kohli (in that order). Jadhav then walks past Dhoni, for India s best finisher has fallen prey to a short ball. An emotion called Dhoni is back in the pavilion.

If I have to overcome odds, I know I can do anything. That s how I always think, and since I keep achieving it most of the times, my belief in my abilities continues to grow, Jadhav told ESPNCricinfo after the match. There was a reason he said so, but I guess that should have mentioned that earlier.

Meanwhile, Kohli does this:

During which, he plays this:

An emotion called Dhoni is being eclipsed by a performance called Kohli. India are getting over Dhoni the captain.

Amidst all this, Jadhav scores a hundred off 65 balls, becoming the sixth-fastest centurion for India. He adds 200 with Kohli, until his captain falls for 122. He is being left with Hardik Pandya to score 88 off 82, with 5 wickets in hand.

Jadhav is not as fit as Kohli. He gets a cramp. He is on the ground. The physio has a look. Ajinkya Rahane runs in with a message in guise of drinks. Jadhav, despite getting retired hurt, decides to continue. He hits a six, showing no signs of pain. But after a couple of boundaries, he holes out to Ben Stokes at deep square-leg.

The crowd applauds. Rahane pats on his back at the boundary line while Jadhav walks back with his head down as if he has not done his job. But little does he know the importance of this innings, for he was busy hitting boundaries to keep the score in check, running hard between the wickets with the ultra-fit Kohli, knowing the fact that his family is watching him doing something no one had expected before the match overshadowing an emotion called Dhoni and a performance called Kohli.

This was the summary of the first of three-ODI series at Pune, and it is likely to affect the second ODI, as both teams will now battle at Cuttack. The preview is no-brainer: India will look to win to seal series, while England will look to win to stay alive in the tournament. However, the prediction may as well give us some grey hair.

India may have won the match. England may not have expected Jadhav to go all guns blazing and pull off the unlikely. Though Kohli continued being Kohli, England batted like a cohesive unit, which gives them an edge over India on Thursday.

Alex Hales played a lovely glance before he was dismissed by Jasprit Bumrah s outrageous direct hit from deep fine-leg. Roy and Joe Root got 70s. Ben Stokes used the long handle to devastating effect to register the fastest half-century by an Englishman against India. Moeen Ali got 28 off 17. Overall they reduced Indian bowling to rubble, so much so that Ravichandran Ashwin went wicketless and Bumrah conceded 7.90 per over.

On the other hand, England bowlers stuck to their gameplan, mixing up their lengths, for Kohli and Dhoni perished off short deliveries. David Willey bowled an absolute ripper to castle KL Rahul. Jake Ball took important wickets of Dhoni, Jadhav, and Ravindra Jadeja. Nonetheless, it was their spin attack that was taken to the cleaners. Moeen, Adil Rashid, and Root gave away 120 in 85 delivers. Given the contest was played on a typical subcontinent track, it did not come as a surprise. However, Moeen bats above Rashid and Root is a part-timer, so England will probably have to do away with Rashid to make way for the experienced pacer Liam Plunkett.

Plunkett had played an ODI series in India, back in 2006, and has been in and out of the team since then. If not this, not long ago did he hit a six off the last ball when England needed 7, which means that England will not lose have to sacrifice on batting depth. Otherwise, the rest are handy enough to level the series 1-1.

India, all the same, will have to wield some chinks in their armour.

Shikhar Dhawan averages 43.3 in ODIs, and his one-run failure should not affect his place in the side. KL Rahul, on the other hand, will have to raise the bar, for a batsman of Rahane s class is warming up the bench. Kohli, Yuvraj Singh, Dhoni, and Kedar will continue to be India s impetus until Champions Trophy, though India have Manish Pandey in the ranks. But the Jadhav magnificence in the first match is likely to keep Pandey as the 12th man.

Jadeja continues being brilliant in the field, saving runs. Pandya scored an unbeaten 40 in pressure situation and scalped important wickets of Eoin Morgan and Jos Buttler. Bumrah is the only one who can consistently bowl in the block-hole. However, Umesh Yadav was wayward, leaking runs at an economy of 9. For that matter, Bhuvneshwar Kumar is in the squad and is likely to get a nod if Kohli does not favour raw pace over over banana in- and out-swingers. But, his economy in the last 5 ODIs read: 6.5, 6.8, 10.6, 4.66, and 8.62. There, the only selection conundrum the team strategists will face before the second ODI. 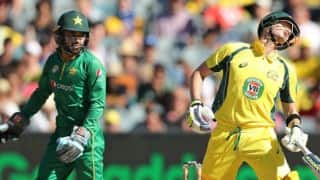 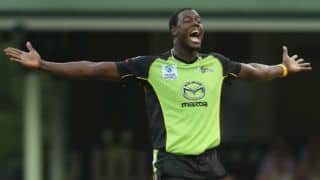