Stokes said England were disappointed on not having bowled India out.

England all-rounder Ben Stokes said that his team was extremely disappointed on not having bowled India out on the first day of the second Test at Lord’s. Put into bat, India finished the day at 290 for nine thanks to a defiant Ajinkya Rahane‘s (103) second Test century that really frustrated the hosts.

“It is a little bit frustrating, especially with their tail doing well,” said Stokes, who took one for 40 in the first innings. “But credit must go to Ajinkya Rahane with the way he batted. It was a really good knock from him and we can take positives from the fact that we restricted them to 140-odd runs for seven wickets before he played that knock,” he said.

India collapsed to 140 for six at tea and then lost Stuart Binny quickly as well but a 90-run stand between Rahane and Bhuvneshwar Kumar (36) saw them to safety in the end. “Kumar seemed to hang around quite well. He played and missed on a number of occasions but his nicks went into the gaps. We had a long, tough day in the field,” said Stokes.

When asked if England were guilty of bowling poorly, he replied, “No, we were happy with our lengths but our lines could have been a bit tighter in the morning, more towards the stumps. The movement was a bit excessive compared to Trent Bridge and we corrected it. They had a lot more played and missed in second session and we got quite a few wickets then. But bowling short in the last session wasn’t my plan. I wasn’t privy to the chat between Jimmy and Cook,” he added. “Shami was looking alright so the plan was to get him off the strike and target Ishant Sharma’s wicket,” he said.

James Anderson finished England’s best bowler on the day taking four for 55, especially in the background of the pushgate saga that has been levelled against him by India, and Stokes was all praise for the pace spearhead. “Full credit to him the way he has bowled today. It is good to concentrate on the cricket and try to be professional. He showed that today and it was good to watch him bowl like that. He is very consistent and knows his game inside out. He plays the game hard and sets up batsmen. Hopefully I can play at his level one day,” Stokes signed off. India vs England, 2nd Test at Lord's: Ajinkya Rahane learnt from MS Dhoni, Virat Kohli how to bat with tail 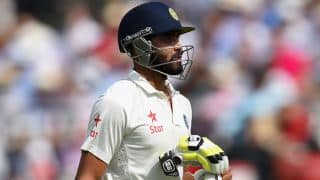