Ishant has helped India record their second win at Lord's after 28 long years.

He was a teenager when Greg Chappell, then the India coach, wanted to summon him as a replacement towards the tail end of India’s 2006-07 tour of South Africa. This did not happen. But the promise the tall and lanky Ishant Sharma displayed when he famously rendered such a torrid time to the then Australian captain Ricky Ponting and master batsman at Perth a year later had, perhaps, not entirely been fulfilled until now.

Every five wicket haul in Test cricket is creditable. It is probably worth that much more if a quicker bowler registers this on relatively unhelpful fourth innings conditions, when the juice in the pitch has oozed out; that, too, to convincingly close out a match.

This is precisely what unfolded in Ishant posting his career-best figures of seven for 74 and India recording only their second win in a Test match at Lord’s – home of cricket – in 82 years.

The gap between the two successes is 28 years. The last time India achieved this was under Kapil Dev, who led India to their most emphatic victory in England till date, 2-0 in a three-Test series, which could well have been a brown-wash had the final encounter at Edgbaston, Birmingham not been interrupted by rain.

Since his Test debut against Bangladesh in 2007, the Delhi pace bowler hasn’t quite set the Yamuna on fire. He has undoubtedly had his purple patches; but he has over this period clearly lost pace, without mastering the skill to swing the ball. Admittedly, injuries have plagued his development.

Ishant passed through a bleak phase after his impressive showing in the West Indies in the spring of 2011 and briefly in the early part of the tour of England thereafter. More recently, he started indicating signs of a comeback with six scalps apiece in the first innings at Johannesburg and Wellington over the winter; but couldn’t finish the job in either series.

He still isn’t doing much with the ball. He, with his height, bangs it in on the seam, bowls off-cutters or just angles it in. But he has of late improved his accuracy; and in the decisive performance on Monday, aimed it short and straight to reap dividends.

England’s happy hookers – Matt Prior, Ben Stokes and Joe Root – obliged, after Moeen Ali took his eyes off the ball in ungainly fashion to a well directed bouncer. As the most experienced medium pacer in the Indian squad, he needed to lead the attack. With his latest exhibition he has established he is capable of doing so and thus come of age. 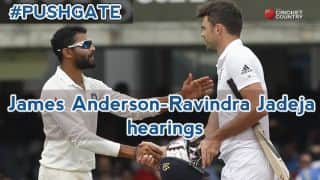