Alastair Cook’s move to put India in was vindicated as early as in the third over.

It seemed a completely different sport from the one played at Trent Bridge. Matt Prior stood far back, as did the slips, and James Anderson’s first ball streaked through and thudded into the gloves of the stumper near his midriff. There was pace, there was bounce, there was movement – often exaggerated, it was more like a game of cricket.

Alastair Cook’s move to put India in was vindicated as early as in the third over. After a couple of steers and deflections, one distinctly streaky off Stuart Broad, Shikhar Dhawan was done in by the movement from Anderson and was well held by Gary Ballance at third slip. The ball moved off the seam from outside the leg stump, the southpaw was squared up and managed a thick edge. Gautam Gamnbhir’s knocks on the doors of the Indian team are getting louder with every innings.

Vijay got off the mark the first ball of the following over, a pleasing drive through the covers which raced away down the hill. But, he was by no means comfortable during the first hour. He fished outside off and was beaten by ones that jagged back.

Anderson, in the meanwhile, bowled a steady offside line to Cheteshwar Pujara from the pavilion end. The young Indian batsman poked at one that rose and moved, but otherwise showed admirable reservoirs of patience. However, both the bowlers were slightly guilty of bowling harmless wide deliveries. “If you are allowing the batsmen leave so many balls alone on such a surface, you are wasting the new ball,” Michael Holding sounded critical. Other than the ball that got Dhawan, almost all of Anderson’s first five overs consisted of away swingers. All the five overs from him were maidens.

The first runs off Anderson’s bowling came off Vijay’s outside edge, between the third slip and gully for four. Cook brought in a fourth catcher in the cordon, but a ball too late. The batsman moved across to cover the outswing and Anderson brought one in. The ball struck the pad, the appeal was loud, the umpire unmoved.

Pujara ultimately got off the mark by steering Broad through gully for three. It was off the 25th ball he faced. The cricket had been slow, but intriguing, and the crowd that had swarmed in to almost fill the stands to capacity were getting a far better game than the people at Nottingham had seen. Drinks were taken in the middle of Anderson’s seventh over after Pujara had some problems with the splice of his bat. India were 25 for one in 12.2 overs. They had weathered the storm of the first hour, but conditions hinted at a continuation in the same vein.

Liam Plunkett ran in from the Nursery Road end, replacing Broad and pitching too short of length to be of effect in his first over. In the second he struck Vijay painfully on the thigh pad and beat him with movement both inwards and outwards. At the other end, Pujara turned a tiring Anderson to the square leg boundary. The spearhead of the England attack was given a break, his figures reading 8-6-11-1. The Indians seemed to have overcome the early terrors of the green tinge, but were far from settling down to a comfortable period of play.

The runs kept coming somewhat streakily. Vijay got a four off Plunkett through gully off the outside edge. He had moved to 16, most of the runs unclean. Cook brought Ben Stokes in from point and placed him in a second gully. A couple of balls later, Plunkett pitched up and Vijay drove him through mid-off for four. The battle was heating up. England bowlers were not exactly displeased to see drives being attempted.

With Anderson off the attack, the bowling did not look as threatening. Ben Stokes was brisk, but without the line or guile to trouble the batsmen too much. Vijay drove him twice through the off-side for a couple of braces. Once in a while an occasional ball darted away, beating the outside edge. But the length was often too short to be constantly penetrative. Nearby, Kapil Dev’s wise words are heard, “If you start bowling short, you become focused on that length.”

And then Vijay left. Plunkett’s length was again short of length, the ball moving from the leg side. Just like Dhawan, he tried to turn him to the leg, got a leading edge, and Ballance took his second blind-sighted catch of the day at slip. The few extra drinks did not seem to have affected his fielding. The 24 runs Vijay scored were sketchy, but the determination and character seemed to have carried on from Trent Bridge. Virat Kohli, two failures behind him in the series, walked in at a dicey 48 for two.

The half century of the innings was brought up by a wild Plunkett delivery that went down the leg side past a diving Prior for four byes.

In the next over Stokes pitched up and Kohli unleashed a majestic drive through the covers ending just below the Grand Stand. The advent of Kohli had good effect on the scoreboard. He pushed Plunkett through the onside for two, clipped him to fine leg for four and flicked him past mid-wicket for three. He followed it up with a drive down the ground for four off Stokes. He was 19 from just 12 balls. Pujara, in the meanwhile, continued to shoulder arms with poise.

For his last over before lunch, Plunkett came in from round the wicket, short of a length. It was curious to say the least, especially on a pitch that offered plenty of movement. He wasted the over, pitching way too much in his half to have any effect. Pujara did not have much to do other than keep his bat out of the way.

There was the regulation over of spin just before the break, Moeen Ali removing his floppy hat and rolling his arm over. Kohli nurdled him for a single, Pujara drove him for another. And out of the blue Kohli nicked one and was dropped by Prior. With this extraordinary stroke of luck, India went into lunch at 73 for two.

By the end of the morning session, the English will feel that the advantage of the toss has not been driven home to the extent it could have been. The attack has been keen, but less than refined and was blunted by the Indian batsmen who left the ball really well. The initial exchanges did end with England with a slight upperhand, but Kohli’s quick little innings towards the end of the second hour restored the balance in India’s favour. Pujara’s 66 ball 11 can prove invaluable in the end. Given that India could have lost the Test in the first session on a green pitch against the new ball. 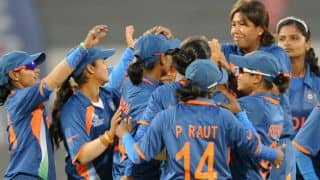 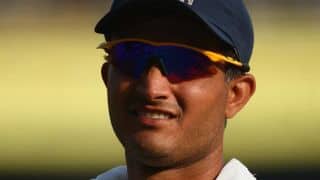