England pacer Stuart Broad first tried to scare that dog but couldn't and as soon as the grounds men arrive, the dog made everyone run.

It was a sort of bizarre and hilarious moment when a dog enters the field during the second Test between India and England at Vishakhapatnam. Not only that dog entered the field but it also irritated a bit and brought some cheeky smiles in their face. England players finally got to smile on something after having a dominating second session by Indian batters Virat Kohli. Just for the information, entry at Dr YS Rajasekhara Reddy ACA-VDCA Cricket Stadium is free in the first day of match and seems like that dog took that thing quite seriously and interrupted the play. Full Cricket Scorecard: India vs England 2nd Test at Visakhapatnam

England pacer Stuart Broad first tried to scare that dog but couldn’t and as soon as the grounds men arrive, the dog made everyone run and entered the field once again to irritate them, which was kind of entertainment for both players and viewers. That interruption led to early tea break of second session. This could be probably the first such incident in the history of Test cricket. The tea break was taken in a bizarre way here today as India and England players battled it out in the 2nd Test.

Would you ever imagine a dog forcing umpires to call for an early tea break? Well, meanwhile we present how viewers reacted towards it on social media.

This dog at the #Vizag stadium has an affinity for cricket #justsaying #IPL2016 pic.twitter.com/eUy8yErCIb

This fellow is faster between the wickets than Pujara & Kohli. Nasser Hussain just claimed. How do I react? #INDvENG pic.twitter.com/0uzdrAuUY2 Chinmay Jawalekar (@CricfreakTweets) November 17, 2016

Good point! What breed? How many dogs have interrupted a batter in the 90’s? Onto it! https://t.co/BIThp63G0v

Who? When? Where? Doesn’t matter !!! Here is the celebrity of the hour #VizagDog #INDvENG @VizagDog

Hey @VizagDog here’s a cool picture of you with a light saber. pic.twitter.com/4C6KmLomdB

Both the Indian batsman Kohli and Chetshwar Pujara are batting excellently as both ended up scoring a ton. Pujara completed his ton in style by hitting a six when he was on 99. 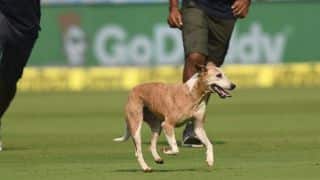 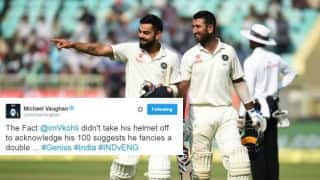