After a soar start to the five-Test series in the first Test at Rajkot, India are all set to rectify their errors as they take on England for the second Test at Visakhapatnam on Thursday. India won the toss and elected to field first in a spin friendly pitch. India made two changes to their side and Jayant Yadav will make debut for hosts replacing Amit Mishra. India had already given a heads up on KL Rahul’s return for the second Test, benching out Gautam Gambhir. Jayant was included for the New Zealand ODI series as well and made successful start to his career. England, in contrast, made a single change and the much talked about pacer James Anderson will be playing replacing Chris Woakes. FULL CRICKET SCORECARD: India vs England 2nd Test at Visakhapatnam

There were sloppy fielding, missed opportunities and spinners had tough time at Rajkot. India will want to forgo all those errors and start afresh at Visakhapatnam. Apart from these India and England have their run-machines celebrating the same milestone on the same day for the first time in this venue. Joe Root and Indian skipper Virat Kohli will be completing their 50th Test and will want make this opportunity count. Murali Vijay and Cheteshwar Pujara will also be completing 3,000 runs as they are just three and 20 runs away from the milestone.

England showed clinical performance as their bowlers grabbed 13 wickets with seven wickets shared amongst the spinners. Ravichandran Ashwin managed to grab just three wickets after being named Man of the Series in back-to-back Test series. 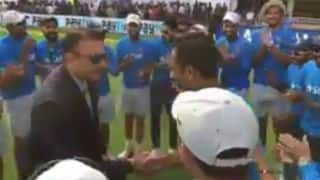