India are off to shaky start after winning the toss and electing to bat first. They lost their opening batsmen KL Rahul early on and now Murali Vijay was grabbed by England’s comeback man James Anderson with Ben Stokes on a roll with his catching spree and Anderson celebrated the wicket with his usual trademark fist-pump and screams with delight on his first wicket in the series. Cheteshwar Pujara and Vijay reached 3,000 Test runs as both required just three and 20 rusn respectively to secure this milestone. Virat Kohli, who completed his 50th Test, has joined Pujara at No. 4. Stuart Broad was the first to get a wicket. Live Cricket Scorecard: India vs England 2nd Test at Visakhapatnam

Stokes grabbed the wicket of Rahul at the slips, who has replaced Gautam Gambhir for the second Test. At the moment Kohli is playing on 16 while Pujara is moving steadily at 9. England have made just a single change to their side with surprise inclusion of Anderson in place of Woakes. India also have Jayant Yadav making debut replacing Amit Mishra. Jayant has already made One-Day International (ODI) debut against New Zealand.

Just 13 overs so far and India are already 45 runs with loss of two wickets. The first match ended in draw with four England batsmen scoring centuries and their bowlers bagging 13 wickets in total. India had tough time in first Test with several missed opportunities and spinners facing pitch problems on green grass. India and England have something to rejoice as both Kohli and Joe Root have completed 50th Test. Both will want to make this opportunity count. 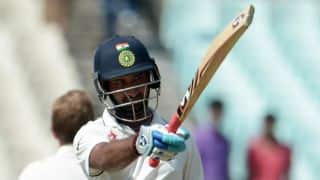