England headed for Lunch at 191 for 6 on Day Three of the second Test against India at Visakhapatnam.

England needed steadiness amidst the chaos they were going through losing five wickets on Day Two of the second Test at Visakhapatnam. Jonathan Bairstow and Ben Stokes came in as saviours and stitched healthy partnership of 110 runs. Bairstow got to his 12th half-century off 137 delivery while Stokes got to his 8th Test fifty off 108 deliveries. Both were going strong until Indian bowler Umesh Yadav decided to change the game plan breaking a fast pace partnership ahead of Lunch. Bairstow was dismissed for 53, the same score of that of Joe Root. He had also reached new milestone of 1,200 Test runs in a calendar year. Live Cricket Scorecard: India vs England 2nd Test at Vizag

England were stuttering with five wickets down of Alastair Cook, Ben Duckett, Moeen Ali, Joe Root and Haseeb Hameed on Day Two. India wrapped their innings for 455 on Day Two with Moeen grabbing three early wickets ahead of Lunch. He avoided Kohli from reaching his third double-century, dismissing him off for 167. Wriddhiman Saha and Ravindra Jadeja were grabbed consecutively. Rashid scalped two while Stokes got a single to end the Indian innings. India had their hopes on Jayant Yadav and Ravichandran Ashwin who secured 64-run stand to take hosts to 450-run mark. Ashwin got to yet another fifty in the process.

Indian innings belonged to Virat Kohli’s century, who was almost there to get to his double-century to make his 50th Test occasion. England have been in command for the first session of Day Three with two fifties. Stokes and Bairstow’s 100-run stand was the only talking point for England before heading for Lunch. 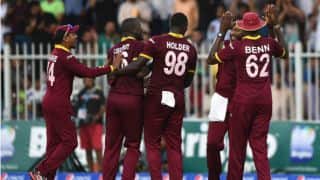