Sam Curran had his moment in the first Test. So did James Anderson in the first innings of the second Test. On Sunday, it was Stuart Broad s turn at Lord s against India.

The 32-year-old scythed through Indian middle order in a terrific spell of swing bowling to leave Indian down and out at 66/6 at tea, and it did not take much time Anderson to wrap up the match as England dismissed India for 130 in the second innings.

With this crushing performance, England won by an innings and 159 runs to go 2-0 up heading to Trent Bridge.

India were bundled out for 107 in the first in 35.2 overs and while they did a tad better in the second, the match was heading in to one direction after Joe Root had won the toss on day two. Anderson became only the second bowler in the history of the game to register 100 wickets at a single venue and finished with match figures of 25.2-10-43-9, while Broad s second innings tally stood at to go with 4/44 to go with his 1/37 in the first.

The fact that Ravichandran Ashwin emerged as the top-scorer (29 and 33*) should be an eye-opener for India. England were supreme throughout the match, India equally mediocre.

England started the day at 357/6 and added 39 runs in the 7.1 overs with Chris Woakes remaining unbeaten on 137 – an effort that helped fetch him the Man-of-the-Match award. Then, the bowlers took over.

After Anderson had removed openers Murali Vijay (0) and KL Rahul (10) early, Cheteshwar Pujara (17) and Ajinkya Rahane (13) put in a dogged resistance, combining for 11.5 overs but such was the relentless attack of the England pacers that the duo could only add 22 runs.

While in the first session Anderson and Woakes dragged their length back and played with the seam off the pitch, Broad operated on a fullish length making the come in to the right-handers.That strategy had Pujara and Rahane playing and missing, and with the odd one on scrambled seam moving away after pitching, the India duo never looked confident. One such delivery had Rahane prodding forward. That was a set-up, for Broad pulled the length back and beat Rahane one delivery prior and then drew him into a loose drive with a pitched-up delivery. Rahane fell for the bait and the flying edge was pounced well by Keaton Jennings at third slip.

Virat Kohli, who couldn t bat at No 4owing to a back strain, showed signs of not being fully fit but fought through and crunched a couple of solid drives for boundary. Pujara, at the other end, finally seemed to be batting the Pujara of old, but Broad got one to nip back in and breached through his defences to hit off stump. With that, Pujara s 86-ball resistance came to an end.

Kohli, meanwhile, grimaced every time he ran between the wicket and bend for the strike. Maybe, taking that as cue, England s strategy changed and the length became short and on middle and leg. Off successive deliveries, Broad banged it in. One appeal down the leg side was turned down. Next ball, Broad again forced Kohli to hop. This time the ball went to Ollie Pope at short leg after taking a bit of the glove. Dar raised his finger, Kohli reviewed, but to no avail.

Dinesh Karthik was trapped in front off the next delivery and India found themselves at 66/6 before rain intervened. Pandya and Ashwin then scored at a brisk pace combining for 55 runs in 69 balls. However, it was just a matter of time and Waokes trapped Pandya in front followed by two quick wickets by Anderson.

Woakes, fittingly, picked up the final Indian wicket to fall. 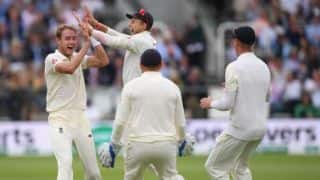 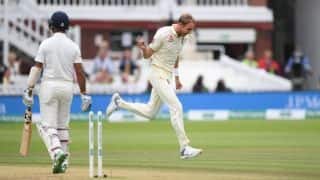