England will have to chase these many runs on a Day Five track. Yes, it is possible, but for that to happen, they will have to display magnificent show of character.

“We played with a lot of skill, lot of fight. Both openers showed incredible temperament and showed us the way to bat out there tomorrow to save the game. Fantastic day for us,” Stuart Broad said after the end of Day Four. For that matter, the English bowler as well showed how to bowl on a track that does not generate enough pace and carry for the pacers. He dismissed the likes of Murali Vijay, KL Rahul, Ajinkya Rahane and Ravichandran Ashwin to end India‘s second with figures of 4 for 33. All the same, the opening duo of Alastair Cook and Haseeb Hameed exhibited remarkable tenacity and batted together for 302 balls.

Cook and Hameed’s batsmanship took us down memory lane and reminded us of the outrageous blockathon South Africa displayed in the four-Test series versus hosts’, India, in 2015. Armed with patience and Test-match technique, the pair played characteristic knocks, keeping India at bay. The 19-year-old Hameed especially had to punch well above his weight to survive 144 balls on a Day Four track. Grit, resistance and patience were his traits that he has already become England‘s batting sensation. However, he perished against the might of Ashwin’s off-spin, getting trapped lbw for 25, inclusive of three boundaries.

On the other hand, Cook scored his 53rd half-century. It may not be his most fluent innings, but given the context of the game, it might well have laid a solid foundation for the middle order to give England a historic win.

Cook was dismissed in the very last over of the day to slow left-arm Ravindra Jadeja, ending day’s play at 87 for 2, with more 318 runs needed to win.

“After losing the toss, you’re in a tricky position on a pitch like this that deteriorates. We’ve shown a lot of skill apart from the final session on Day 2”, added an upbeat Broad ahead of Day Five.

India were in a commanding position at the start of day’s play. Leading by 298, they had captain-deputy pair of Virat Kohli and Rahane at the crease. The plan was simple: post a total close to 500, bowl England out of the contest and take 1-0 lead.

“There would have been talk this morning about India wanting to score 550 and take the game away,” Broad added.

However, Rahane’s dismissal saw the lower middle-order falling like a pack of cards. Even the in-form Kohli failed to take India to the desired target, perishing for a resounding 81. India were skittled out for 204, posting a target of 405.

Broad suffered damage to his tendon, and was spotted struggling while bowling. He added, “It’s sore but I’ve got to play a Test match. Quite often as a fast bowler you’re going to get niggles here and there. The sole of the foot is an awkward place to have it as you have to run over it all the time. I’ve been able to play this Test match okay and hopefully it will fix up.”

No team has chased down such huge target. As a result, attaining 405 in such tough batting conditions would be an uphill climb for the Englishmen.

“We’re still in this Test match. We’ll chat with the batsmen who played out there and take it into tomorrow. It offered a little bit of variable bounce and little bit of reverse swing this morning which you get when the pitch has dried out.”

While India are 8 wickets away from victory, England need 318 more to create history.

At the crease is Joe Root, and to follow him are: Ben Duckett, Ben Stokes, Moeen Ali. Out of these, two have already scored a century. And if they manage to encore their brilliance, England might as well chase down the target. 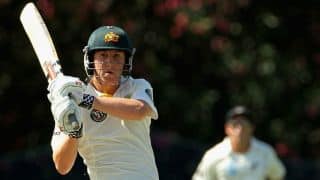