Rain meant there was no play on the first day of the second Test between England and India at Lord's on Thursday.

Rain meant there was no play on the first day of the second Test between England and India at Lord’s on Thursday. Early morning overcast skies in north London eventually gave way to gentle but persistent rain which was sufficient to ensure the pitch and square remained fully covered.

Lunch was brought forward by 30 minutes to 12:30pm in the hope of a prompt resumption come the scheduled second session of play. But that was not to be.

READ: When opening days of Tests in England were washed out

After the scheduled start of the tea interval at 3:40pm, the umpires held an inspection out in the middle where they held a discussion with head groundsman Mick Hunt, who is overseeing his last Test pitch at the ‘home of cricket’ before he retires at the end of the season following 49 years on the Lord’s staff.

It was the first time a whole day’s Test play in England had been lost to bad weather since August 24 2013 when the fourth day of the fifth Ashes clash at The Oval was abandoned without a ball bowled.

The last time a day’s Test play was washed out completely at Lord’s came 17 years ago when the scheduled opening day of the first Test against Pakistan was abandoned on May 17 2001.

England lead the current five-match series 1-0 after a 31-run victory in the first Test at Edgbaston last week. 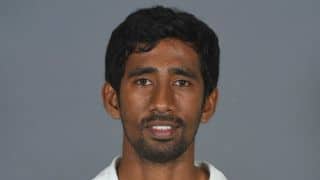 Wriddhiman Saha back in India after undergoing surgery in Manchester 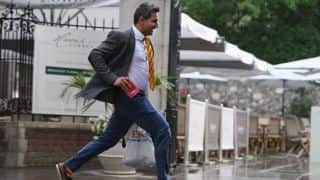