The Haryana off-spinner became the 286th player to play Test cricket for India as he made his debut against England in this Test.

India off-spinner Jayant Yadav heaped praise on wicketkeeper-batsman Wriddhiman Saha for convincing skipper Virat Kohli to use the DRS for picking up Moeen Ali’s wicket on Day Two of the second Test against England. Yadav picked up his first international Test wicket with the dismissal of Moeen who was adjudged lbw that was ascertained after a review before stumps on second day’s play. Earlier, the Haryana off-spinner became the 286th player to play Test cricket for India as he made his debut against England on in this Test. Live Cricket Scorecard: India vs England 2nd Test at Vizag

“With the review, Wriddhiman Saha did the job of convincing the captain for me. We both thought he was out. Can’t wait to start doing this again tomorrow,” said Yadav.

Commenting on his debut, Yadav said he dreamt of this day and it feels good to make contributions for the team.

“Thoroughly enjoyed it. Good day’s cricket. Since the time I remember, since I have started playing serious cricket, not in the streets but in an academy, I have dreamt of this day. This dressing room is full of people who make you comfortable. KL Rahul, a recent debutant, told me what to expect on debut. It’s good I didn’t do anything yesterday, gave me time to process the emotions and formulate my plans,” added Yadav.

Yadav, who played 42 First-Class matches and picked up 117 wickets, contributed crucial 35 runs in the lower order in India’s first innings score of 455 runs and picked up a wicket later in the evening to tighten India’s screws in the match. 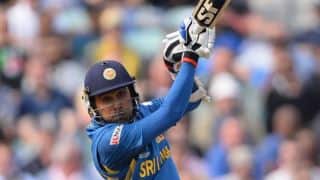