Only 6.3 overs could be bowled in the first session before rain halted play, but that was enough for England to pick two Indian wickets.

The second India vs England Test finally got underway after England skipper Joe Root won the toss on day two and expectedly put India in to bat in overcast conditions.

However, only 6.3 overs could be bowled in the first session before rain halted play, but that was enough for England to pick two Indian wickets.

James Anderson started the proceedings off the fifth delivery of the match, Anderson bowled a peach of delivery to get rid of Murali Vijay for a duck. The ball was full angling in and Vijay set himself up for a flick, but upon pitching the ball swung late and snuck past the Indian openers bat and rattled on to the stumps. India 0/1.

Cheteshwar Pujara, getting a game in place Shikhar Dhawan, played out a probing spell from Anderson and Stuart Broad, while KL Rahul, the other opener, got himself a boundary through covers and then off his pads before prodding forward for an Anderson good length delivery that moved just enough to take the edge. Jonny Bairstow behind the stumps obliged.

Virat Kohli, once again found himself in the middle early but he played just two deliveries before it started to rain and the play was halted.

It pelted down for nearly an hour before umpires decided to resume play, however, even the before the covers could be taken off, the drizzle started again forcing early lunch on day two at Lord s 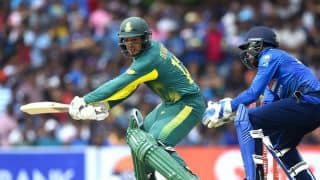 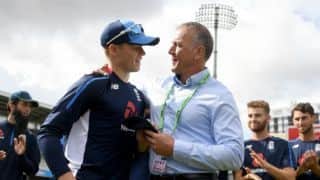