Losing Cheteshwar Pujara and Ajinkya Rahane before stumps will be playing on the Virat Kohli's mind when he takes guard on Day Two.

India‘s Test skipper, Virat Kohli, has been ruling the roost since long and on first day of the second Test versus England, he has added another astonishing feather to his cap. Coming onto bat with the score at 22 for 2, Kohli stitched over a 200-run stand with Cheteshwar Pujara and remained unbeaten at 151 to take India to 317 for 4. In this process, Kohli also became the first Indian Test skipper to achieve three scores of, or over, 150 in the same calendar year. Before this, Kohli also had two 150-plus scores against West Indies and New Zealand. He was able to convert both innings into a double-hundred and will be expected to register his third 200+ score in 2016 on Day Two of ongoing Test. LIVE CRICKET SCORECARD: India vs England 2nd Test at Visakhapatnam

Here is a list indicating the ominous touch enjoyed by some Test skippers in one calendar year, with Kohli being the new entrant:

Kohli looked nonchalant in his stay at the middle as there were no rash shots and exhibited great temperament to take India out of troubled waters. He timed the balls from the middle of the blade and only gave one chance to the Englishmen as Adil Rashid dropped him at fine-leg. Nonetheless, apart from that, he seemed set in the middle and sure of what he was doing.

Losing Pujara and his deputy, Ajinkya Rahane, before stumps will be playing on the skipper’s mind when he takes guard on Day Two. He will be expected to make another big innings and stitch important partnerships with India’s lower-order. With 6 wickets intact, India look set to cross 500 in the first innings at Visakhapatnam. 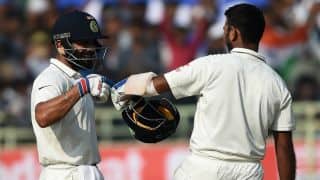