India vs England, 3rd ODI at Brisbane: Ajinkya Rahane out for 33

India vs England, 3rd ODI at Brisbane: Ajinkya Rahane out for 33

Ajinkya Rahane put on 56 along with Ambati Rayudu for the second wicket.

After getting off to a good start, Ajinkya Rahane is finally out after he was caught by James Taylor off the bowling of Steven Finn. Rahane was trying to pull the ball but it took the top edge and Taylor was able to grab onto the ball without any trouble. Finn gets his first wicket of the match.  Rahane and Ambati Rayudu had put up 56 runs for the second wicket after Shikhar Dhawan was dismissed in the first over.

Virat Kohli has joined Rayudu on the field. Kohli did not have a great game against Australia in the second game and will look to score big runs to get India their first victory of the tour. Rayudu at the other end has made a cautious start to the match and will look to get on with things now that he seems to have gotten his eye in.

Both India and England lost their opening match against Australia and will want to put up a good show and get off the mark in the series at Brisbane after MS Dhoni had won the toss earlier and decided to bat first. 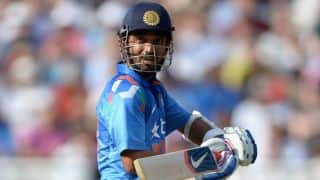 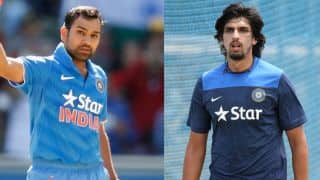