England are on top of India after the opening powerplay overs.

England, courtesy of the early wicket of Shikhar Dhawan are well on top of India in the third One-Day International (ODI) against England at Brisbane. India are 36 for one in 10 overs. Dhawan was fishing outside the off stump and nicked one to Jos Buttler off the bowling of James Anderson. Ambati Rayudu joined Ajinkya Rahane out in the middle, who opened the innings with Dhawan.

India have just managed  two fours and a six in the first powerplay. Rahane managed to hit a six off Stuart Broad in the 10th over. Both India and England lost their opening games to Australia in the first and second ODIs respectively. Both India and and England have made a few changes in the side and will hope they can come out on top and stay alive in the tournament.

India suffered a major blow after their hero from the previous game Rohit Sharma missed out due to injury. India will hope that they’ve gotten their combinations right after Rayudu and Stuart Binny were drafted in the side. 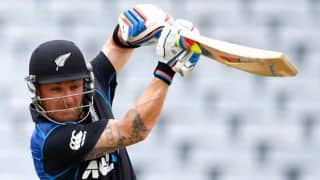