Ian Bell and James Taylor have brought on their 100 partnership of 111 balls.

Ian Bell and James Taylor have stitched a 100-run stand for the second wicket of 111 balls in pursuit of 154 runs to win the third One-Day International (ODI) at Brisbane. Bell had earlier reached his 32nd ODI half-century and has been dominant in this partnership. James Taylor at the other end has also supported Bell very well. England have a strong batting line-up and surely cannot lose it from here.

India were earlier bundled out for 153 inside 40 overs after a five-wicket haul from Steven Finn and four wickets from England’s premier fast bowler James Anderson, who returns after missing the previous game against Australia due to injury. India had earlier won the toss and elected to bat first but it was downhill for them since then. Ajinkya Rahane and Ambati Rayudu had put on a 56-run stand, which was followed by a 70-run partnership between MS Dhoni and Stuart Binny. 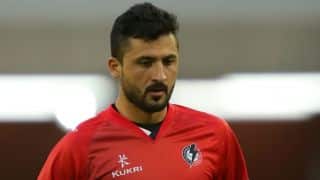