Ian Bell had reached his 32nd One-Day International (ODI) against India at Brisbane off 51 balls. Bell has been dominant right from the beginning of the innings and has played an excellent innings in pursuit of 154-run target set by India earlier. Moeen Ali is the only wicket to fall in the England innings so far and England and have never looked in any sort of trouble so far. England have a strong batting line-up and should not find any problem in getting the score.

India have not bowled particularly badly, they are unable to keep the leak of runs under control. This after India had won the toss and elected to bat, with Stuart Binny top scoring with 44. Steven Finn got his first five-wicket haul of his career and James Anderson gave him excellent support with four wickets. England need to achieve the target within 40 overs to gain a bonus point. 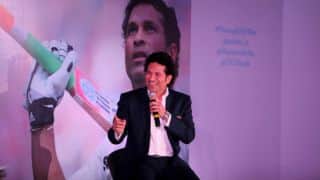