Former England captain Michael Vaughan has lauded Eoin Morgan’s captaincy in the third One-day International against India  at Brisbane in the triangular series also involving Australia. Morgan took over English captaincy from Alastair Cook who was sacked and left out of the squad due to a parched run of form in coloured clothing for England. Morgan scored a brilliant hundred against Australia in the first match of the Tri series at Sydney, although England lost that match narrowly.

Outstanding display of Captaincy by @Eoin16 throughout the whole innings .. Backed up by high class bowling… Great to see @ECB_cricket ..

India won the toss and elected to bat in the third ODI against England at Brisbane. James Anderson celebrated his return from injury with the wicket of Shikhar Dhawan. England made regular inroads into the famed Indian batting line-up with Steven Finn finishing as the pick of the bowlers.

Finn took five for 33, which included the prized scalps of Ajinkya Rahane and Virat Kohli. This was Finn’s maiden fifer in ODI cricket. Finn’s five for 33 was the second best performance by an English pacer against India in ODIs and India’s 153 was their lowest ODI total against England in matches they’ve been bowled out. 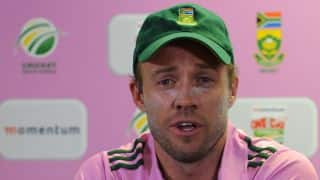