Shami's wicket was the first by a pace bowler in the match.

Mohammed Shami’s surprise short ball got him his first wicket in the third One-Day International (ODI) between India against England at Trent Bridge. Chris Woakes was hurried by a short ball, and ended up pulling it right into the hands of Mohit Sharma at the deep. 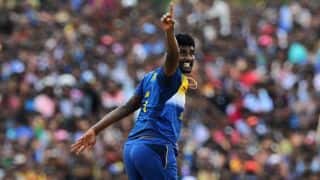