England looked set for a bigger total but India's good death bowling and Hardik Pandya's inspiring second spell made the difference for India in the 3rd ODI at Eden Gardens, Kolkata.

England posted 321 for 8 in their stipulated 50 overs against India in the third ODI at Eden Gardens, Kolkata. England looked set for more, but India s good death bowling and Hardik Pandya s inspiring second spell made all the difference. Despite that, Ben Stokes and Chris Woakes added 70 in 43 balls to help England get to a fighting score. Stokes slammed his second fifty of the series and finished with 57 not out from 39 balls, while Woakes, hero of the previous game with ball was run out in the ultimate over for 34 from 19. In an innings where the average run rate was 6.42, Pandya finished with figures of 10-1-49-3.

It was Jason Roy s 65 set the platform for England, yet again. Roy has scored 73, 82 and 65 in the series. He finished the series with an average of 73.33 at an incredible strike rate of 115.8. Roy was tested outside off-stump, but walked across the stumps often to disturb the the bowlers line. Unfortunately, he could not capitalise on any of his fifties throughout the series, and that hurt England. For the third time in a row Roy fell to Ravindra Jadeja. The wicket immediately put England on the back-foot before Jonny Bairstow and Eoin Morgan began the repair work. Full cricket scorecard: India vs England, 3rd ODI

However, Jadeja s big moment came in the previous over, thanks to a smart ploy from Virat Kohli. Sam Billings, replacement for Alex Hales, had a torrid time against Jasprit Bumrah, but was beginning to open up when the spinners came. Known for his sweeps and reverse-sweeps, Billings is always a threat against spin. His 93 had won England the first warm-up match against India A at Brabourne Stadium, Mumbai.

Jadeja bowled one outside off-stump in anticipation of the reverse-sweep. Billings fell into the trap and played it straight to Bumrah at short third-man. Billings wicket was also Jadeja s 150th in ODIs. He also became the fifth Indian after Kapil Dev, Manoj Prabhakar, Sachin Tendulkar and Irfan Pathan to score 1,500 runs and claim 150 wickets in ODIs.

Having played for Kolkata Knight Riders, England captain Eoin Morgan is well aware of the venue. He had mentioned that he had never seen this much grass on a Kolkata pitch. He started slowly and was troubled by Bumrah s length, but once he got set, he made the Indian bowlers pay. He was once again severe on his nemesis Ravichandran Ashwin. He smacked 3 sixes and 2 boundaries, and England were 194 in the 34th over when he flicked a loose delivery from Pandya (that too outside leg) straight to short fine-leg.

Pandya, who had gone for 28 runs in his first 4 overs, came back strong since then. His second spell saw him give away 21 runs from the last 6, accounting for the wickets of Morgan, the dangerous Jos Buttler and Bairstow.

Bumrah went for 68 from 10 overs but he was brilliant on occasions and bowled as many as 30 dot balls. Plays and misses were the pattern of the day. Even Bhuvneshwar Kumar s 8-0-56-0 does not really reflect how well he bowled at the start and at the death on a surface where another score in excess of 350 could have been a possibility.

Earlier, Kohli won the toss and considering elected to field, probably with the dew factor in mind. The grass on the pitch might also have helped him decide, along with the fact that he is the greatest chaser in contemporary cricket, if not in cricket history.

India s opening bowlers Bhuvneshwar and Pandya got the ball to move around early. There was uneven bounce to assist them. They beat the outside edge frequently, but Roy lit things up with his improvisation that unsettled the bowlers lines. Billings played his part but in an unfamiliar batting position. There were a few good hits amidst the struggles.

English bowlers have struggled to contain runs and with dew expected to play a role after dusk, it will be a daunting task for England to contain the in-form Indian middle-order. Meanwhile, India will go ahead with a new opening pair yet again: with Shikhar Dhawan dropped, KL Rahul will be joined by Ajinkya Rahane at the top. 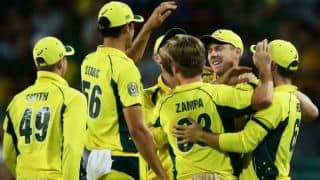 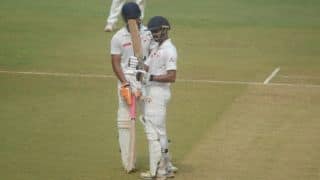