Former India captain Sourav Ganguly has come down hard on the current one-day team s selection during the 1-2 series loss to England, questioning the dropping of KL Rahul for Tuesday s decider and critiquing the reliance on Virat Kohli s run-making abilities.

Having hammered top-ranked England in the first ODI, India were beaten in the next two which handed them a first bilateral series loss under Kohli s captaincy. While Kohli went without a century, his contributions of 75, 45 and 75 repeatedly propped up the batting order; Rohit Sharma, after an unbeaten 138 in the first ODI, managed 17 in the next two, while Shikhar Dhawan scored 40, 36 and 44 without converting any of these starts.

Speaking on TV after the third ODI, Ganguly backed Rahul to solve India s long-standing quest to lock in a No 4 batsman while questioning the dependence on Kohli and the openers: Eyes closed, it s KL Rahul at 4. Your top four have to be your best players and you ve got to persist with them. Go and speak to KL Rahul and say, I ll give you 15 games. Just go and play.

Referencing Kohli s impact on India s landmark 5-1 ODI series win in South Africa earlier this year, when the captain was Man of the Series for scoring 558 runs in 6 innings, with 3 centuries, Ganguly said: In South Africa [India] won because Kohli got 3 hundreds in 6 games. Currently, if Kohli doesn t get a hundred, you ll find it difficult to win matches. It’s a big issue, something that India will have to sort out. You have to have quality.

Ajinkya Rahane, Suresh Raina, Manish Pandey, Kedar Jadhav, Yuvraj Singh, Dinesh Karthik, MS Dhoni and Hardik Pandya have all been batted at No. 4 in ODIs over the past two years but none has been locked in. On Tuesday, Rahul was dropped and Karthik used at No. 4, the result being an innings of 21 off 22 balls.

“Dhoni, Raina, Karthik [are] very good at Not 5, 6, 7. India need to find a No 4. I think two of your best batsmen are not being looked after properly, said Ganguly. I m not saying it s deliberate. Maybe it s a mistake, maybe when you look at things from the other side you look at it differently. But it s my opinion, from this side of the ground if those two [Rahul or Rahane] have to play at No 4 because it s too much pressure on Rohit Sharma and Kohli. 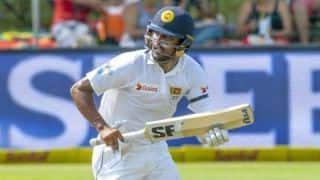