India have beaten England comfortably in the first two ODIs at Pune and Cuttack, and are firm favourites going into the third ODI, at Kolkata.

India have beaten England comfortably in the first two ODIs at Pune and Cuttack, and are firm favourites going into the third ODI, at Kolkata. There have been moments when England have threatened to come back, but despite made to sweat on occasions, India s victories were reasonably emphatic. Four men have scored hundred for India in the series Virat Kohli and Kedar Jadhav in the first, Yuvraj Singh and MS Dhoni in the second putting up one humongous partnership every time that sealed the match. As for England, they did reach 350 in both matches, but their ordinary bowling has lacked imagination all through. While it is unlikely that England will score 350 for a third time in the series that too at the massive Eden Gardens it cannot be denied that they have the firepower to put up a big score.

England received a major blow before the third ODI when Alex Hales was ruled out of the match as well as the entire T20I series with a fractured hand. Hales will, in all likelihood, be replaced by Sam Billings, though England may want to open with Joe Root who had an excellent partnership with Jason Roy at Cuttack. England have their hitters in Roy, Billings, Root, Eoin Morgan, Ben Stokes, and Jos Buttler, followed by a cohort of bowling all-rounders, but the match may be decided in the other innings when England bowl and India bat, that is.

There is no such problem for India. Bhuvneshwar Kumar did an excellent job at Cuttack, and is expected to do the same in Kolkata, where the breeze assists swing bowling. Kohli may want to give him an extended spell with the new ball. Jasprit Bumrah, accurate with his yorkers, continues to impress with his superb form.

Ravichandran Ashwin was wayward at Pune, but found his rhythm going at Cuttack. He had issues gripping the ball in the Kolkata dew in the World T20 last year. It will be interesting to see how Kohli uses him. Ravindra Jadeja probably did a better job than Ashwin, while Hardik Pandya has been brisk with ball and sensible with bat with time. Jadhav continued to show application in short spells, and is slowly developing into an asset even when there is dew.

Kohli s Cuttack failure was more of an aberration than anything, and he will be hungry to go for the kill the moment he walks out with bat. With the middle-order amidst runs, the pressure will be on the openers, Shikhar Dhawan and KL Rahul. India will have to axe one of them when Rohit Sharma returns for the Champions Trophy. In other words, Dhawan and Rahul will be fighting against the bowlers as well as on a healthier note against each other, when they walk out today.

India will definitely go in as favourites. England may benefit from the breeze that has helped swing bowlers greatly over decades. Their five-pronged pace attack will be looking forward to that, especially under lights. If that does not work, even a third 350 will not be enough for them. England may have an outrageously strong batting line-up, but one needs to defend those massive scores if they want to have a consistent impact in the sport. 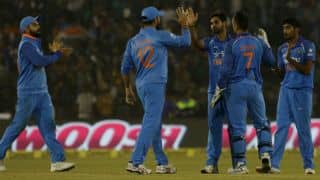