With the average score at Leeds in the last five years being 298, India s score may seem fair distance away from being a match-winning one.

The only chink in the formidable Indian ODI unit that one could point out ahead of the England series was the inconsistency and the lack of stability in the middle-order. While the top-order did the job in the series opener, defeat in the second ODI raised a few uncomfortable questions; and for obvious reasons the spotlight in the series decider had to be on the Indian middle-order.

Unfortunately, that spotlight may as well remain there for a while after Indian conceded their early advantage losing three wickets in the middle overs for just 34 runs to post 256/8 in the 3rd ODI at Headingley, Leeds on Tuesday.

Notwithstanding the early departure of Rohit Sharma (2), opener Shikhar Dhawan and skipper Virat Kohli laid a good platform for the batsmen to follow with a 71-run stand for the second wicket. Dhawan looked assured in the middle after playing out decent opening spells from Mark Wood and David Willey. The England pacers discipline did yield the wicket of Sharma in the sixth over when the opener mistimed a flick to deep backward square during a struggling period. Willey provided the breakthrough.

However, Dhawan and Kohli got the ball rolling with a breezy partnership that saw India go from 32 for 1 in the first 10 overs to 100 for 2 in 20. That India lost a wicket during that period was down to a brilliant run-out from Ben Stokes from square leg that had Dhawan short of the non-striker s crease after being sent back by Kohli. Dhawan played an enterprising knock of 44 (49).

Kohli motored along going past 3000 ODI runs as skipper – the fastest to do so in just 49 innings – in company of Dinesh Karthik who got a game in place of KL Rahul. Karthik had started off with a late dab towards third man for a boundary and looked settled in the middle before England started their comeback courtesy Adil Rashid. The legbreak bowler tempted Karthik with a flighted delivery, but his expansive drive could only produce an inside edge that found the stumps.

In walked MS Dhoni to a loud cheer and he took his time to settle in, which in turn allowed England skipper Eoin Morgan to employ spin from both ends – the offbreak of Ali to go with legbreak for Rashid – and keep a check on the run-rate. Yet, India managed 156 for 3 in 30 with Kohli batting in 71.

Rashid, however, turned things around with a double-wicket over that saw Kohli beaten all ends up with a delivery that pitched at middle and leg and turned past Kohli – on the backfoot – to crash onto the stumps. Morgan got a leg slip for Suresh Raina and the UP batsman fell for the trap glancing one behind to Joe Root. In the next over, Ali trapped Dhoni in front, but the wicket-keeper batsman survived courtesy a right DRS call.

But that reprieve, did little for India as Dhoni continued to struggle. India managed 41 runs in the next ten overs losing Hardik Pandya in the process. Dhoni laboured to 28 off 50 deliveries. Ali finished with 10-0-47-0 while Rashid reaped 10-0-49-3.

Re-introduction of pace helped Dhoni as he took one boundary each of Wood and Stokes, but his laborious vigit for 66 deliveries for 42 runs ended with peach of a delivery from Willey that cut across Dhoni after pitching and took the edge to Buttler.

Bhuvneshwar Kumar (21) and Shardul Thakur (22*) hit some lusty blows late in the innings ensuring India went past the 250-run mark.

With the average score at Leeds in the last five years being 298, India s score may seem fair distance away from being a match-winning one, but England would be wary of the threat both Kuldeep Yadav and Yuzvendra Chahal will pose. 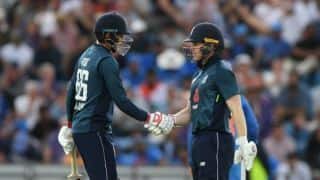