MS Dhoni and Akshar Patel were out off consecutive deliveries as Steven Finn picks gets his fifer.

MS Dhoni is out for 34 off 61 deliveries, thus ending a partnership of 70 runs for the sixth wicket between him and Stuart Binny. This was a much needed partnership after India were reduced to 67 for five after 19 overs. He was soon followed in the hut by Akshar Patel for a duck after Steven Finn bowled him. Finn therefore gets his first fifer in One-Day Internationals (ODI). Finn was on a hat-trick but the new batsman Bhuvneshwar Kumar left the hat-trick ball outside off-stump alone. The wicket of Dhoni, gave wicket-keeper Jos Buttler his fifth dismissal of the match.

Stuart Binny is going strong at the other end as he is batting on 37, soon approaching his maiden half-century is ODIs. Not much batting  left up India’s sleeve as they desperately try to bat out the remaining overs and put a respectable score on the board. MS Dhoni had earlier won the toss and decided to bat first, but would have expected a better performance from his batsmen. 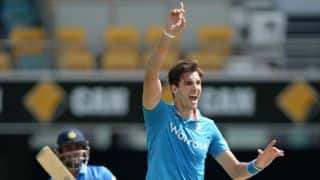