Rahane became the 22nd Indian to score 3000 plus Test runs and 191st player overall to the milestone.

Before the start of the match Rahane needed 59 runs to the landmark and reached the personal milestone with a streaky boundary through the slip cordon off Stuart Broad early in the final session of day one.

With this, Rahane became the 22nd Indian to score 3000 plus Test runs and 191st player overall to the milestone. Rahane s half-century was his first 50 plus score in over an year.

Rahane had a lean patch of form that led to questions over his place in the Test XI, but with a solid knock at trent Bridge, Rahane seems to have answered his critics.

Starting from the Sri Lanka tour, the Mumbai batsman had been struggling to get going. In Sri Lanka, he notched up scores of 17,4,0,2,1 and 10. In South Africa, under testing conditions Rahane made 9 and 48 in the third Test. After Afghanistan he made 10 while in the first four innings in England this time around Rahane made 15,2,18 and 13.

Rahane departed for 81 when he went for a drive off Stuart Broad and the edge was taken but Alastair Cook at first slip. 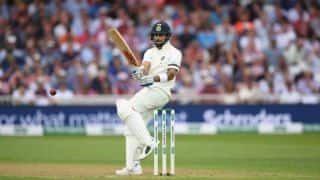