With Parthiv Patel and Cheteshwar Pujara looking good and set at the moment, India will now look to put up a big score on the board.

Hosts India have started their reply to England s 283 on a solid note with the score reading 60 for 1 at lunch on Day Two of the Mohali Test on Sunday. After bundling out the visitors early in the morning, India s opening pair of Murali Vijay and Parthiv Patel gave India a decent start of 39. But India lost Vijay in the first session after the batsman failed to make the chances he got count. He was dropped once and survived some drama when there was an obstructing-the-field appeal against him. But he was finally out for 12 after playing a lame shot chasing a delivery from Ben Stokes well outside the off stump. At lunch, Cheteshwar Pujara was giving company to Parthiv, who has looked brilliant so far. The two batsmen were unbeaten on 8 and 37 respectively. Full Cricket Scorecard: India vs England 3rd Test at Mohali.

India started their first innings with their sixth opening pair this year. They started their first Test in 2016 against West Indies with the preferred opening pair of Vijay and KL Rahul. Since then, either due to injuries or poor form, India have tried out different combinations including other players like Shikhar Dhawan, Gautam Gambhir, Pujara as a makeshift opener and now Parthiv. Coming to this Test, the duo of Vijay and Parthiv started well. While Vijay often called the monk for his monk-like-patience started off on his usual cautious note, Parthiv got a few boundaries early on, which helped him ease up a bit on his return to international cricket after 8 long years.

There was a bit of a drama on the field early on in the third over of India s innings, when James Anderson threw the ball back at the striker’s end where Vijay was standing and appealed for obstructing the field after it hit Vijay s pads. The umpires had a consultation and they did not go upstairs, but it did hold up the game for a while. Unfazed by the happenings around him, Vijay continued to march ahead, but only for a brief while. He also got a reprieve later on when Moeen Ali came into operation and Jos Buttler dropped a slightly difficult catch of him at mid-wicket.

But Vijay could not make most of it as he was dismissed the next over by Ben Stokes for 12. He unnecessarily chased a widish delivery and managed an edge to it which was easily pouched by Jonny Bairstow behind the wicket. Parthiv was then joined by the prolific run-scorer Pujara. India s new Mr. Dependable, Pujara came into this match after hitting hundreds in his previous three Tests. The two cricketers from the state of Gujarat then took the team safely to lunch without any further loss.

Parthiv has been impressive so far, playing with flair and flamboyance on his return. He was prudent in his choice of using DRS too, when he was given caught behind down the leg side with the ball hitting his shirt. A bit of a flashy player, Parthiv did not hesitate in hitting the odd balls towards the boundary ropes and played confidently. He has hit six boundaries in his unbeaten 37 so far.

Earlier, Indian bowlers did not take long to wrap things up on the second morning of the third Test at Mohali as England innings was folded up for 283. Mohammed Shami took the wickets of both the overnight batsmen Adil Rashid and Gareth Batty. While Rashid was caught behind the wickets, Batty was caught plumb in front of the wickets. James Anderson, who had a king pair in the last game, remained not out on 13.

For India, spinners did their job but Umesh and Shami were the pick of the bowlers. They bowled impeccable spells at menacing pace, swinging the ball both conventionally as well as reversing it. They were unlucky they did not get more wickets on the first day. But Shami made up for it on the second morning by wiping off the tail early. He finished with 3 wickets while Ravindra Jadeja, Umesh and Jayant Yadav took two each and Ravichandran Ashwin got one wicket of English skipper Alastair Cook.

With these two batsmen looking good and set at the moment, India will now look to put up a big score on the board. The pitch will wear and tear as the game progresses and batting will become increasingly difficult Day Three onwards. A good first innings lead hence will stand India in good stead. The fact that they have plenty of batting to follow should also comfort them at this point. The best time for batting in India in a Test is generally the second session, and India will like to make the most of it. 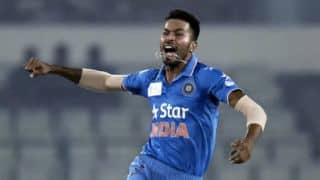