Despite a middle-order collapse, India still have a good chance of getting a decent lead. They would ideally want to get as many runs as possible because they are due to bat last in the game.

All-rounders Ravichandran Ashwin and Ravindra Jadeja kept the hosts ahead in the third Test against England at Mohali, as they guided India to 271 for 6 at stumps on Day Two. India still trail the visitors by 12 runs. Ashwin and Jadeja came together after a middle-order collapse in the final session saw India reeling at 214 for 6 from being 148 for 2 at one stage. They remained unbeaten on 57 and 31 respectively at the close of play, bringing in their fifty partnership as well. Besides Ashwin s half-century, skipper Virat Kohli and Cheteshwar Pujara also hit fine fifties. For England, Adil Rashid was the pick of the bowlers with his 3 wickets while Ben Stokes chipped in with 2 wickets. Full Cricket Scorecard: India vs England 3rd Test at Mohali.

India had dominated the first two sessions and started the final session from 148 for 2. With two well set batsmen in the middle, they were in complete control of the situation. However, England just needed two balls into the session to turn things around. Pujara, who had been patient all day, tried slogging a short delivery from Adil Rashid but found Chris Woakes one of the only three Englishmen on the leg side who did well to hold on to a low catch diving forward. This brought India s out-of-form vice-captain Ajinkya Rahane in the middle.

One of India s reliable batsmen, Rahane was expected to find his form in Mohali. However, his struggle continued as he failed to read a Rashid googly which struck on his pads. It looked plumb and the umpire s decision confirmed so. But Rahane not just compounded India s problems by getting out for a duck, but also ended up wasting a review. There was more agony in store for the hosts as the debutant Karun Nair was dismissed for 4 after hitting a boundary as his first scoring shot in Test cricket.

He paid the price of his skipper s indecisiveness, as Kohli first called for a run after playing the ball towards point and then backed out after watching Jos Buttler getting to it quickly and having a shy at the non-striker s end. The direct-hit found the youngster short of his ground, and India went from 148 for 2 to 156 for 5.

India still had enough batting left, with Ashwin, Jadeja and Jayant Yadav yet to bat and Kohli still out there. All they required was two calm heads in the middle and a partnership. Ashwin and Kohli, perhaps the two best men for the job in such situation, began with the repair work. Ashwin started with a couple of boundaries to Woakes at the third man. Kohli too was accumulating runs from the other end as the pair adopted the approach which Kohli-Pujara had employed.

Both had added 48 for the sixth wicket when Kohli departed for 62 with score reading 204 for 6. He fell for a wide delivery outside the off stump; just the kind of ball he had been leaving all day. Kohli’s dismissal was a huge moment in the game, as it potentially hurt India s chances of getting vital first-innings lead. Ashwin was then joined by Jadeja, and the two all-rounders played sensibly to take India to 271 for 6 at the end of day s play.

India s performance in the last session notwithstanding, the first two sessions definitely belonged to them. Their bowlers did not take long to wrap things up on the second morning as England innings was folded up for 283. Mohammed Shami took the wickets of both the overnight batsmen Rashid and Gareth Batty. While Rashid was caught behind the wickets, Batty was caught plumb in front of the wickets. James Anderson, who had a king pair in the last game, remained not out on 13. Shami finished with 3 wickets while Jadeja, Umesh and Jayant took two each and Ashwin got one.

India then started well, with Murali Vijay and Parthiv Patel adding 39 for the first wicket before Vijay fell for 12. Parthiv then added 34 with Pujara for the second wicket before Rashid got him lbw. He must be disappointed with his effort after getting a start and looking impressive throughout his stay. His dismissal brought Kohli in the middle and he started from where he had left in Visakhapatnam one of his favourite hunting grounds. He got off the mark with an exquisite cover drive off Rashid s bowling.

Pujara and Kohli then saw through the defining phase in the second session as the ball started doing a bit. Woakes and Anderson were swinging the ball both ways and the Kohli-Pujara pair did well to service. They brought in their fifty-run stand and in the meantime their individual fifties too, which were instrumental in India getting to where they are right now.

Despite a middle-order collapse, India still have a good chance of getting a decent all-important lead. They would ideally want to get as many runs as possible because they are due to bat last in the game, which is going to be a herculean task. 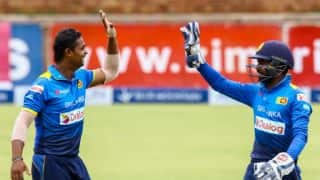