Ravindra Jadeja and Jayant Yadav's 53 run-unbeaten partnership has put India in command, as they look to gain a lead well over 100 and then put England under pressure.

India owned the first session on third day of the third Test against England in Mohali with their spinners putting up an authoritative performance on display, albeit with the bat. Ravichandran Ashwin, who had scored a fifty on the second day, got dismissed for 72 this morning. But Ravindra Jadeja scored his third Test fifty and helped India gain a crucial lead in the match. He was well supported by off-spinner Jayant Yadav, who too showed his batting prowess walking in at No.9. The two have shared an unbeaten 53 run-stand for the eighth wicket thus far as India took lunch with score reading 354 for 7. They lead by 71 runs with Jadeja (70) and Jayant (26) going strong at the moment. Full Cricket Scorecard: India vs England 3rd Test at Mohali.

India s all-round-duo of Ashwin and Jadeja started the Day Three well, getting their side past the England total and take a vital lead. Ashwin faced the first delivery of the day being bowled by Chris Woakes and pushed it comfortably through the legs for a boundary, thus setting the tone for the day. England introduced spin from the other end, as Moeen Ali came in to bowl. It was a tactical move, considering Jadeja was out there in the middle. But the southpaw dealt with him efficiently, hitting him for a four and getting India past the 283-run mark. The duo also brought in the highest partnership of the match in the process.

Alastair Cook was prompt in replacing Moeen with James Anderson, who started operating from round the wicket to Jadeja. Both the batsmen, however, remained unflustered and went about their business nonchalantly. Soon India reached the 300-run mark.

Woakes, who had been bowling unchanged since the start of the day, did induce a few edges from Ashwin s willow, but was unlucky they did not reach to the fielder. He was replaced by Ben Stokes in the 95th over and England straightaway got the much-needed breakthrough. Ashwin, looking set for his fifth Test ton, finally fell for 72 after a 97-run stand for the seventh wicket. He was caught at point. Jayant, who had a fine debut both with the bat as well as ball in Visakhapatnam, replaced him.

Jadeja meanwhile continued to bat well and brought in his third Test fifty, which could not have come at a more opportune time. Coming in at 204 for 6, when India still trailed by 79, this got to be his finest batting effort in the longest format. An elated Jadeja marked the milestone with his traditional sword-dance bat-fencing celebration!

Watch @imjadeja do the traditional sword dance with his bat as he brings up his FIFTY!!! @Paytm Test Cricket #INDvENG pic.twitter.com/z1EWOUC8ZC

Jayant gave him a good company too. He hit Anderson for a couple of boundaries in one over, which earned him applause even from the Indian batsmen sitting in the dugout. Though batting at No.9 in this side, Jayant has always batted higher for Haryana and India A . Having a First-Class double ton to his name, Jayant is no mug with the bat and he showed that today once again.

Both the batsmen took India to the 50-run lead mark, which is extremely crucial in the context of the match. Jadeja s innings was a blend of caution and aggression. He played some breathtaking shots, like the four he hit to Stokes over mid-on. The ball was aimed towards his ribs and he punched it off the back foot for a stunning four. At the same time, he displayed terrific patience to deal with the good deliveries.

Jayant continued from where he had left in the last Test, playing the balls on merit. His defence was rock solid and he hit the loose balls for fours effortlessly. Both continued to play in an unfazed manner and guided India to lunch without any further damage, adding 50-runs for the eighth wicket. Their 53 run-unbeaten partnership has put India in command, as they look to gain a lead well over 100 and then put England under pressure. The only success England got this morning went to Stokes account, as India scored 83 runs in the session losing just a single wicket of Ashwin.

India had earlier started their innings on Day Two, with Murali Vijay and Parthiv Patel adding 39 for the first wicket before Vijay fell for 12. Parthiv (42) then added 34 runs with Cheteshwar Pujara for the second wicket before Rashid got him lbw. Pujara (51) and Virat Kohli (62) put India in command but a collapse saw them crawl to 271 for 6 at stumps with Ashwin and Jadeja leading the recovery. The two, along with Jayant, continued with the good work on Day Three as well. 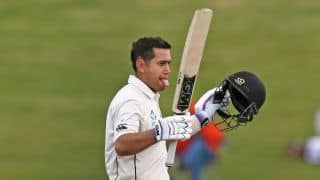