India vs England 3rd Test at Souhampton: Have been playing well, was frustrating without big score, says I

Bell top-scored for England with 167 runs as England amass 569/7 decl.

England batsman Ian Bell on Monday expressed his delight at scoring his 21st Test hundred in the third match versus India here and said that he has been “playing well”. His 167 runs helped the hosts declare at 569 for seven in their first innings and put pressure on the visitors who scored 25 for one at stumps to trail by 544 runs.

“I have felt like I have been playing well and then found some strange ways to get out,” said Bell. “So it was nice to go through the whole process and get a big hundred. It is frustrating without a big score because the job of the top six batsmen is to score runs. You train hard and you prepare well, but that doesn’t guarantee results.”

The English senior players, including skipper Alastair Cook who scored 95 runs on day one and Bell himself, have come in for some slack after India won the second Test at Lord’s by 95 runs. “All the senior guys in the dressing room try hard. It is frustrating for all of us, not just as individuals but as a team. Like I said, you can prepare well but the end results are not guaranteed.

“Jadeja is someone who bowls accurately and India wanted to bowl a lot of maiden overs. So I didn’t want to let him settle down. So I decided to use my feet, step out at times or go back in the crease.

“The seniors are experienced players and we have to help the younger guys as well. So we have to be contributing both in and out of the dressing room, but on the field it is needed more, and it gets frustrating when that bit doesn’t happen. So it is nice to contribute and see the score at 560-odd declared,” said Bell.

Bell put on a 106-run partnership for the sixth wicket with debutant keeper-batsman Jos Buttler who scored 85 runs, his maiden Test fifty. “He is an outstanding batsman. He didn’t quite get a good start and that was perhaps because he was thinking too much.

But then he started playing the way he does and he looked better. He is someone who can utilise such platforms and give us a move-on. “Obviously when the circumstances are different his role will also change, but in such a position, as an attacking batsman, he can win us some international matches,” said Bell, praising the young player.

Bell himself played some attacking cricket, especially against Ravindra Jadeja who was taken for 21 runs in one of the overs after lunch, as Bell reached his hundred. “Jadeja is someone who bowls accurately and India wanted to bowl a lot of maiden overs. So I didn’t want to let him settle down. So I decided to use my feet, step out at times or go back in the crease. This is a good pitch with some good bounce. On such pitches as a batsman you have to be quite proactive,” said Bell of his ploy.

India now trail by 544 runs with three days remaining. England will have to toil hard to force a victory and level the series.

“I think this is one of the best wickets in the country. It has nice bounce and pace, and batsmen can play good shots here while the edges and nicks do carry as well. It is an outstanding one-day pitch and even in the last Test here against Sri Lanka, that was a good pitch,” he said. “This pitch will deteriorate and will take some spin as well. India did not hold a few of their catches and if they had done so, it could have created more trouble for us. It will be hard work for us, but this is a good Test pitch,” he signed off. 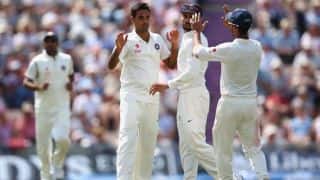