Buttler tries to ease the pressure on himself ahead of his Test debut against India.

Jos Buttler tried to ease the pressure on himself ahead of his Test debut against India this weekend by insisting he alone could not “fix” England’s ills. Just under two months ago, following his stunning one-day hundred against Sri Lanka at Lord’s, the 23-year-old Buttler doubted if he was ready for the challenge of Test cricket.

But Matt Prior’s withdrawal through injury following India’s 95-run win at Lord’s on Monday saw Lancashire wicketkeeper-batsman Buttler called up for Sunday’s third Test of a five-match series in Southampton. England’s Lord’s loss left them 1-0 down in the series and represented their tenth Test without a win under struggling captain Alastair Cook, a run that includes seven defeats in nine matches.

Former England all-rounder Andrew Flintoff, now a Lancashire team-mate, has said Buttler could be “one of the greats of the game,” but the gloveman for one, was keen to put his situation into perspective.

“I’m not coming in expecting to be the one person who can fix English cricket … unfortunately,” Buttler told reporters on Friday. “It’d be great if I can. That would be brilliant. But I’m just coming in determined to be authentic, be myself, enjoy the occasion and look forward to helping England put in a performance.”

Buttler will, at least, carry no scars from the recent winless streak while, at the same time, knowing many his team-mates from the limited overs format should aid his transition into the Test arena.

“I come in pretty fresh,” he said. “Obviously I haven’t been involved in Test cricket before, so I come in without that baggage. I know people and have built those relationships. I’m not coming in with a ‘first day at school’ feeling.” Buttler left his native Somerset for Lancashire ahead of the start of this season so as to be assured of being a first-choice county wicketkeeper.

“Test cricket’s been my ultimate goal for the whole of my career. It’s probably come a little bit sooner than I thought it would, which is great. Mentally, I’ve come round to the fact I was closer than perhaps I thought I was at the time (seven weeks ago) — and my cricket has progressed faster than I thought,” he said.

While ready to adapt to the demands of being a middle-order Test batsman, Buttler, who has scored 568 run in eight first-class-matches this season with one hundred at an average over 40, said he did not want to abandon the attacking game that had served him so well.

I am still a work in progress. I have areas to improve, but at the same time I have got to think I’m 23… and far from the finished article. Not many people probably are when they first start.

“Naturally I want to score runs and hit the ball, and I don’t think things should change that much. Obviously I have got to be a bit more selective and work out a method to bat longer periods of time, so I can put a few shots away that I might not need to play in Test cricket.”

Buttler added: “When Kevin Pietersen played for England, people were excited to watch him because he was always looking to score runs. David Warner has obviously done that role for Australia very successfully. It would be silly of me to go into my shell completely and curb all my natural instincts — because at the end of the day that is what has got me to where I have got to.”

As for his wicketkeeping, Buttler said. “I am still a work in progress. I have areas to improve, but at the same time I have got to think I’m 23 … and far from the finished article. Not many people probably are when they first start.” 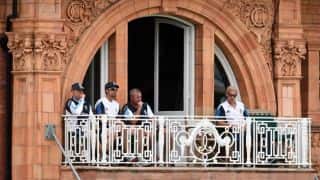