Make what you want of Hardik Pandya, but the 24-year-old has a five-wicket haul to his name in England and probably has changed the complexion ofthe India vs England Test series with a memorable spell of swing bowling in the second session of day two of the third Test at Trent Bridge at Nottingham on Sunday.

Make what you want of Hardik Pandya, but the 24-year-old has a five-wicket haul to his name in England and probably has changed the complexion ofthe India vs England Test series with a memorable spell of swing bowling in the second session of day two of the third Test at Trent Bridge at Nottingham on Sunday.

He was brought on to bowl early in the second session, because Ravichandran Ashwin did not take to the field post-lunch owing to a hip niggle, and that inadvertently turned out to be a masterstroke from Virat Kohli. It took Pandya all of 29 deliveries to take five wickets, the second fewest for an Indian to take five wickets in a Test innings.

He got a wicket off the first delivery of the match when he had Joe Root on the back foot poking at a swinging delivery. KL Rahul took a good low catch that needed third Umpire s intervention and after there was no stopping him.

24.1 Hardik Pandya to Joe Root. out, OUT! Is what the big screen flashes and Root has been given his marching orders. The crowd is not happy at all and nor is Root as he shakes his head while walking off. The soft signal has surely played a big role in this being given out as it could have gone either way. India though won’t care as they have the talisman of the English batting line-up and they get him cheaply. Hardik Pandya delivers straight away. He bowls it on a back of a length around off, it pitches and straightens. Root goes back and tries to defend but the ball takes the outside edge and goes low towards Rahul at second slip. He seems to have taken it and starts celebrating. Root waits there. The umpires have a chat and then take it upstairs. The soft signal is OUT. Time for the replays and several ones, it is ruled in the favour of the visiting side. The Indians are ecstatic as they are right on top now. England trail by another 243 runs.

30.1 Hardik Pandya to Jonny Bairstow. out, OUT! Another one bites the dust! Hardik Pandya is silencing his critics in some style. He gets his second and India are all over England now. This is another top nut. The outswinger on a fuller length around off, Bairstow tries to drive but his feet are rooted to the crease. The ball takes the edge and goes into the hands of Rahul who takes his third catch of the innings. The Indians are pumped up as they probably have the most reliable batsman in this English line-up. 329 looks farfetched now.

30.6 Hardik Pandya to Chris Woakes. out, OUT! Snicko shows a spike and Woakes starts walking back. He takes a review along with him and England are now in dire straits. This is excellent from Pandya. He says enough of the full ones and bangs in a short ball. It is a well-directed one. Surprises Chris Woakes as he goes for the pull without keeping his eyes on the ball. It seems to have taken the glove and Rishabh Pant behind takes it one handed. The Indians appeal and the umpire raises his finger. Chris Woakes walks upto his partner and has a chat. He then goes for the review and replays show there is an edge. Pandya now has a three-fer and the centurion of the last game walks back with a single digit score.

32.1 Hardik Pandya to Adil Rashid. out, OUT! Maiden four-fer for Pandya in Tests! He is relishing the conditions out there. Wickets on consecutive balls for him. Lovely stuff again. He has really found his length and line today. He bowls it around off, just behind the fuller length. Once again it swings away. Rashid tries to defend inside the line. The ball kisses the outside edge of the bat and settles into the mitts of Pant who is having a dream debut with the gloves. His fifth catch and the end now is nigh for England. Hat-trick ball coming up.

32.5 Hardik Pandya to Stuart Broad. out, OUT! That is plumb! Fifer for Hardik Pandya. All the talks about why he is being selected have just been thrown out of the window. He has turned the game around in just 29 balls. Another delivery which is on the fuller side has done the trick for him. It swings back in late from around off, Broad from within his crease tries to flick but misses to get hit on the pads. The players appeal but the umpire raises the finger. Broad asks his partner about the review but Buttler asks him to keep walking. England need another 2 to avoid the follow-on, they have one wicket in hand. 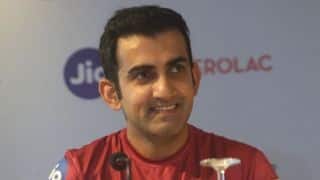 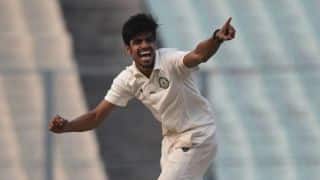