India finally made a breakthrough in form of England captain Alastair Cook on Day Three of the third Test at Mohali.

India finally made a breakthrough in form of England captain Alastair Cook on Day Three of the third Test at Mohali. It took two close events to dismiss Cook, who was eventually dismissed by Ravichandran Ashwin. The right-arm off-spinner has now grabbed Cook s priced scalp twice in this Test. The first time Ashwin delivery pitched outside-leg that saved the England captain, who appealed for DRS intervention and saved himself. It followed by second attempt from Ashwin that beat the inside edge and off-stump by a slight distance. The third time Ashwin came up with peach of delivery, passing it between Cook s bat and pad to rattle his wickets for 12. While Mitchell Johnson has dismissed Cook most often in Test, Ashwin becomes third bowler to dismiss Cook 7 times so far. LIVE Cricket Scorecard: India vs England 3rd Test at Mohali

England began their innings with new opening batsman Joe Root along with Cook. Haseeb Hameed suffered an injury to his finger and is expecting to get an x-ray done. As of now there is no confirmation on Hameed coming in to bat in the last session. Before heading for tea break, India posted 417 with a lead of 134 runs. England lost their second wicket soon, when their star batsman Moeen Ali failed to control his stroke and ended up giving a simple catch to the fielder at mid-on off Ashwin. LIVE BLOG & UPDATES: India vs England, 3rd Test, Day 3 at Mohali

At beginning of the day India were tumbling at 271 for 6. India s all-rounder Ashwin and Ravindra Jadeja saved their side from precarious condition with their fifties. Ashwin scored a composed 72 that featured 11 boundaries, while Jadeja s power-packed performance ended on 90 that included as many as 10 fours and a six. 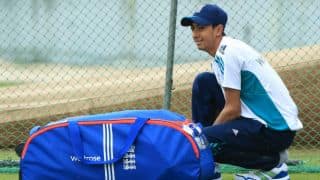 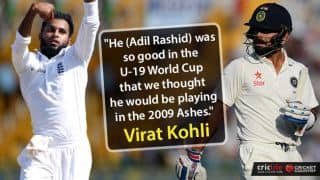